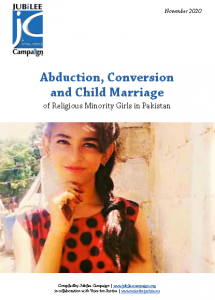 A new report from Jubilee Campaign USA in collaboration with Voice for Justice provides an overview of several common factors involved in cases of forced conversion and abduction.

On October 13, 13-year-old Pakistani Christian girl Arzoo Raja was kidnapped outside of her home in Karachi. Two days later, Arzoo’s parents were told that their daughter had been the latest victim of forced conversion and forced marriage. Azhar Ali, a Muslim man of about 45 years old, who lives in the house opposite Arzoo, was responsible for the kidnapping. The police showed little willingness to help Arzoo’s family, and therefore the family had little hope of getting their daughter back.

According to the National Commission of Justice and Peace (NCJP) and the Pakistan Hindu Council, each year approximately 1,000 Christian and Hindu girls in Pakistan are kidnapped, forcibly converted to Islam, and married off to their kidnappers or rapists.

The hope is that this report may serve as a tool to conduct advocacy and effectively address the situation and worrying trends of forced conversion and abductions of girls and women in Pakistan.

Forcing Christian and Hindu girls to marry their captors and to convert to Islam is a reprehensible practice which happens often in Pakistan.

Religious minorities are considered to be second class citizens by a large part of the Pakistani Muslim community. Islam is the state religion and is practiced by more then 96 percent of the population. Non-Muslims are despised because they do not follow the teachings of Islam. This mindset of social hierarchy and division is often used as a justification for the abuse against vulnerable religious minorities.

The subordinate position of Christians and Hindus in Pakistan’s society makes it easy for Muslim men to kidnap girls of these communities with total impunity. It is very unlikely that the police, politicians, judges and other influential persons – who are predominantly Muslim – will campaign for and secure the return of these girls and follow through within the criminal justice system.

This permitting and accepting of discrimination against religious minorities at all levels in society enforces perpetrators to commit crimes with total impunity. In the case of Arzoo: her father describes how audacious and brazen the perpetrator was: “Azhar and his family live right across from us. We see them every day, knowing they kidnapped our daughter and they probably know where
Arzoo and Azhar are. Why is the police not doing anything?”

Another factor is the culture of fear within society, which allows the discrimination to continue.

Individuals who question the status quo and challenge Islamic classical understanding, risk their status and position in society and even have to fear for their own lives. Radical Muslims might perceive the campaigning for justice served to Christians and people from other religious minorities as an act of betrayal against the Muslim majority society and Muslim ideology.