It is seven years this month since seven Bahá’í 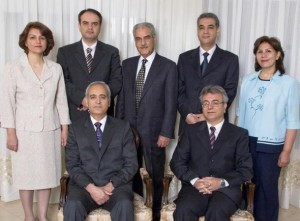 leaders in Iran were arrested and imprisoned. The Bahá’í Community of the UK are calling for the anniversary to be marked by action in the UK, through people writing to their newly-elected MP, requesting that they urge the Foreign Secretary to write to President Rouhani of Iran and press him to take immediate steps to effect the immediate and unconditional release of these seven prisoners of conscience.

The group were detained for 20 months without charge before a trial in 2010 that was notable for its failure to adhere to due process as laid out in Iranian law and in international law. They were sentenced to 20 years imprisonment. This is thought to be the longest sentence given to any current prisoners of conscience in Iran.