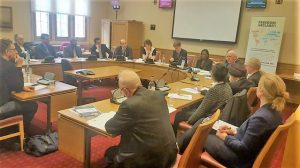 The APPG and CIFoRB team were joined by Baroness Berridge to hear how to support IPPFoRB post-Berlin; and Dr Fabio Petito (Senior Lecturer in International Relations at the University of Sussex).
The event was chaired by Stephen Timms MP and was also joined by Chian Yiew Lim (Human Rights Officer for the UN Special Rapporteur for FoRB), Dr Josephine Ojiambo (Deputy-Secretary General (political), Commonwealth Secretariat) and Jim Shannon MP (Chair, APPG).

There was a video interview with Jan Figel, the EU’s first Special Envoy for the promotion of freedom of religion or belief outside the European Union  View now 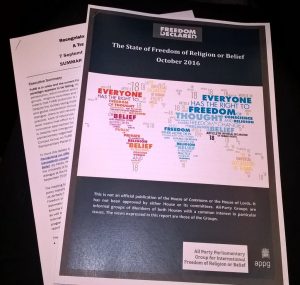 The APPG published a report to mark the Day and the event, entitled The State of Freedom of Religion or Belief. In celebration of International Freedom of Religion or Belief (FoRB) Day – 27 October – the APPG team wanted to bring together assessments of where advancing the right to FoRB stands at different international and national levels. The team hopes that this document – which the APPG will seek to produce annually – will help all advocates and practitioners of FoRB read the perspectives and ideas of those working on FoRB at different levels. While a section on advancing FoRB at the civil society level has not been included, the team has done so intentionally as the experience amongst actors in this sphere will be as diverse as the number of organisations and individuals advancing FoRB. Through the event on International FoRB day in UK Parliament and after the APPG hopes that civil society organisations will critically engage with this document and the work programmes of those outlined in this report.