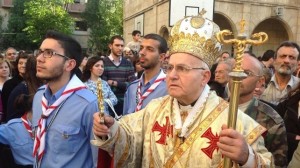 One of Syria’s most senior Catholic leaders has pleaded the Western powers for a full scale intervention in the country’s five year conflict, following another attack on rebel-held Aleppo, reports Aid to the Church in Need.

Full-scale intervention by the West is urgently needed “to halt these monstrosities” being perpetrated in Syria and Iraq, according to the bishop whose diocese is at the epicentre of the conflict.

In an impassioned plea Melkite Greek Catholic Archbishop Jean-Clement Jeanbart described how his archbishopric in Aleppo – already hit more than 20 times by mortar shells – had once again come under fire.

Writing the day after the attack, Archbishop Jeanbart said nobody was hurt in the latest bombardment, which comes on top of blasts which over the past two years have damaged five of the Melkites’ 12 churches in the city.

He stated: “ISIS, which has already killed thousands in the region, is terrifying the faithful in Aleppo.

“After [attacks on] Maloula, Mosul, Idleb and Palmyra, what is the West waiting for before it intervenes?

“What are the great nations waiting for before they put a halt to these monstrosities?

“May all of those who believe in… God and all those with compassion for the innocent raise their voice with us and call on civilized countries to take action to bring about peace.”

Aleppo has seen some of the worst fighting in the conflict that erupted in the wake of the 2011 Arab Spring, with forces loyal to Syrian President Bashar Al-Assad and rebel groups battling it out for supremacy and large sections of the city reduced to rubble.

The violence has intensified in the last few weeks with claims that the government has stepped up its bombardment of Aleppo in response to rebel offensives.

Vast numbers of people of all faiths are fleeing the region, with reports from Chaldean Bishop Antoine Audo last month that Aleppo’s 250,000 Christians have dwindled to below 100,000.

In his message, the Archbishop writes: “Let me cry with my people, violated and murdered…

“Allow me to stand by numerous families in Aleppo who are in mourning. Because of this ugly and barbarous war, they have lost so many loved ones, fathers, mothers, brothers and sisters and cherished children.”

He stressed the trauma caused by people losing homes, and livelihoods destroyed in the conflict.

“Insecurity,” he writes, “is wearing them down, depressing them, adding more each day to their anxiety and sadness.”

He adds: “Allow me to be bitter when comforting countless parents mortified by the deprivation that robs their children of the basic necessities needed to promote dignity and the ability to grow up healthy.”

Archbishop Jeanbart’s comments come after a trip to the USA a month ago in which he warned that his Church is in a dire situation and appealed for Christians and others in the West to provide urgent assistance.