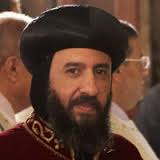 His Grace Bishop Angaelos, General Bishop of the Coptic Orthodox Church in the United Kingdom will be conferred the honour of Officer of the Order of the British Empire for services to International Religious Freedom by Her Majesty The Queen as announced in the Queen’s Birthday Honours List, published in the London Gazette on 13 June 2015.

Bishop Angaelos said the following in response to the announcement:

“I am humbled by this award because I see it as my role and duty to advocate for religious freedom as part of my ministry. While I am thankful for this great honour, it also comes with a sense of sadness that in the 21st Century we still need to defend people’s God-given rights and freedoms in this way. I consider this an award to every person who has worked with and supported me along the way and pray that God rewards and blesses them for all they have done and all they will continue to do. I must also express my sincere gratitude to Her Majesty The Queen and the Prime Minister for considering this cause worthy of such public acknowledgement.”