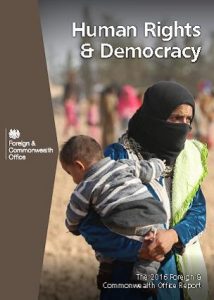 The “Annual Report on Human Rights and Democracy puts human rights centre stage of foreign policy,” is the opening line of the FCO news release.

It continues “This report focuses on how the government is working to protect and promote human rights around the world. It also sets out our 30 Human Rights Priority Countries (HRPCs).”

It states that the key themes include:

In his introduction Lord Ahmad says

“Human rights are more than just principles enshrined in international law. They are the bedrock of successful and progressive societies. Evidence shows that countries where human rights are respected tend to be more prosperous, democratic and stable. Corruption is less likely to take root, and extremism is less likely to find fertile ground. That is why safeguarding, promoting and defending human rights, including freedom of religion or belief, is a key and integral part of the work of the Foreign and Commonwealth Office. British diplomats put human rights at the heart of everything they do…”

There is a section devoted to FoRB

In 2016, the UK emphasised Freedom of Religion or Belief (FoRB) as a freedom which helps to create societies that are more resilient against violent extremism. With this in mind, in October 2016 we held a groundbreaking conference, bringing together experts in FoRB with those working on countering violent extremism. Participants considered how protecting FoRB can help to combat violent extremism by building inclusive societies.

At the UN HRC, we continued to play an active role in negotiations to maintain consensus on the adoption and implementation of both the EU led ‘Freedom of Religion or Belief’ resolution and the ‘Combating Religious Intolerance’ resolution led by the Organisation of Islamic Cooperation.

We also continued our policy of raising cases of persecution in individual countries. In September, the Foreign Secretary launched the global ‘Bringing Daesh to Justice’ campaign to support justice efforts, and to recognise and address the harm suffered by victims of Daesh crimes in Syria and Iraq.

In Burma, we were aware of incidents of violence and hate speech against Muslims and Christians, particularly the Rohingya community in Rakhine State. The UK continued to work with the new civilian government to support and encourage them in tackling this issue.

In China, we regularly raised our concerns about FoRB, both through the UK-China Human Rights Dialogue in October 2016, and as part of our broader relationship.

In Iran, the Baha’i faith in particular was subject to mounting persecution, and we were concerned by state efforts to identify, monitor and arbitrarily detain Baha’is. The UK regularly called on Iran to allow the Special Rapporteur on FoRB to have access to the country.

In Russia, we lobbied the Russian Government about the implementation of the new “Yarovaya Law” aimed at tackling religious extremism. Its vaguely defined ban on “missionary activity” means that in theory certain religious activity cannot take place outside registered religious buildings.

In Indonesia, we have made representations encouraging the Indonesian Government to respect freedom of religion or belief as guaranteed in the Indonesian Constitution, including for those who do not practice one of the six religions recognised under Indonesian law. We welcome statements by Indonesian President Joko Widodo reaffirming his commitment to pluralism and religious diversity.

In Pakistan, we raised our concerns about the misuse of the blasphemy laws and discrimination against religious minorities, in particular Ahmadiyya and Christian communities.

In Sudan, FoRB continued to be an issue which we raised through our ongoing human rights dialogue with Sudan.

We also supported various projects through our Magna Carta Fund, such as support for a network of human rights defenders in South Asia, and a project to support including FoRB in the curriculum of secondary schools in the Middle East and North Africa region.

The FCO also continued to run religious literacy training to help its staff understand the key role which religion plays in shaping the views of the majority of the world’s population.

[*those with a reference to FoRB]