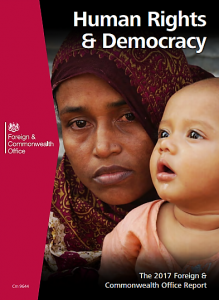 The official press release stated “The report is a barometer for the global human rights picture with particular emphasis on the FCO’s 30 Human Rights Priority Countries. The report also focuses on how the UK is working to protect and promote human rights across the world. It covers the period from January to December 2017.

The Minister for Human Rights, Lord Ahmad of Wimbledon, said: “70 years ago the UK played a vital role in drafting the seminal text that remains the cornerstone for human rights, the Universal Declaration of Human Rights. However, the ongoing repression of people’s rights reminds us that our work to defend them is as pressing and urgent as ever. This report is vital in documenting the serious concerns we have about the human rights situations in a range of countries. Standing up for human rights is not only the right thing; it helps to create a stable more prosperous world.”

The report also focuses on how the UK is working to protect and promote human rights across the world.

Promoting and defending human rights is a fundamental part of the UK’s foreign policy. Every day, all over the world, British ministers, diplomats and officials champion gender equality, LGBT rights, freedom of religion or belief and freedom of expression.

In 2017, promoting and defending freedom of religion or belief (FoRB) remained a high priority for the UK. In February, the Prime Minister, Theresa May, reiterated the government’s commitment to “stand up for the freedom of people of all religions to practice their beliefs in peace and safety”. The Minister for Human Rights, Lord Ahmad of Wimbledon, made FoRB a personal priority and began to develop a strategy to galvanise the work of our diplomatic network.

The right to FoRB came under increasing pressure. Discrimination and persecution of minorities was seen in many forms and diverse parts of the world. For example, in Burma, the religious identity of the Rohingya people has long been a factor behind the discrimination they suffer at the hands of the state, and was arguably a motivating factor behind the violence they suffered at the hands of the Burmese military in 2017. Minorities in Pakistan continued to suffer persecution and discrimination, and blasphemy legislation continued to be abused by the justice system. Persecution of the Baha’i in Iran and Yemen was particularly acute, and followers of that faith also faced discrimination elsewhere.

In many countries, through patient, quiet diplomacy or through public statements, the UK worked to reinforce the importance of the universal right to FoRB. For example, in Iraq, we worked to build consensus around the importance of freedom of religion or belief, and of its promotion and protection, in the process of reconstruction of the country following the conflict with Daesh.

Promoting FoRB in multilateral fora remained an important element of the UK’s work. Lord Ahmad highlighted the importance of defending the right to FoRB when he addressed the Human Rights Council in September. At the UN General Assembly in December, the UK worked successfully to help maintain consensus on the adoption of the EU-sponsored resolution on ‘Freedom of Religion or Belief’, and the Organisation for Islamic Cooperation-sponsored resolution on ‘Combating Religious Intolerance’.

During 2017, we continued to raise cases of persecution in individual countries, in particular:

Throughout 2017, we continued to support a number of FoRB projects through the FCO’s Magna Carta Fund. These included a project to support secondary school teachers in Iraq, Lebanon and Morocco to educate their students about tolerance and FoRB. An indication of the impact of this project came when the Kurdish Regional Government asked for it to be shared with every child in the region.

The FCO works closely with DFID to raise concerns on FoRB with partner governments. During 2017, DFID also sharpened its focus on FoRB, by announcing a UK Aid Connect programme to address key development challenges in building FoRB.

Looking forward to 2018, a key focus of our work will be to use our newly developed strategy to mobilise the diplomatic network. This will include building on our existing network of parliamentarians, faith leaders and academia through ongoing collaboration. Our bilateral interventions will also remain an important part of our work as we seek to prioritise a number of countries for our FoRB work.

Finally, we will build on strengthening and amplifying the work of our diplomatic network to further their efforts to promote FoRB across the globe.

The FCO’s 30 Human Rights Priority Countries – those highlighted is where there is specific reference to FoRB: