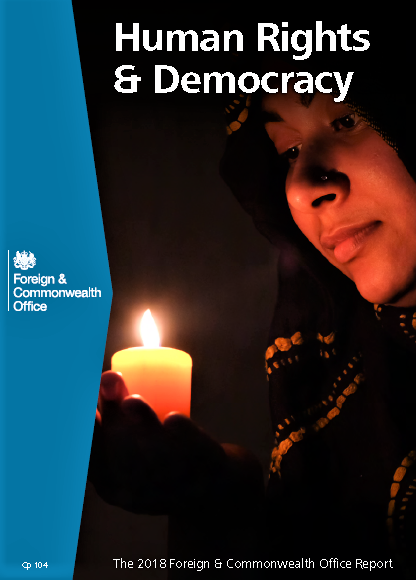 2018 marked the 70th anniversary of the Universal Declaration of Human Rights, and the report examines what the government has done to promote and defend human rights globally, echoing the principles and values enshrined in these Declarations.

“Today’s report makes for sobering reading. Respect for human rights globally seems to be at an all-time low. As Foreign Secretary I will ensure that British diplomats continue to defend and protect human rights wherever they are.”

Minister of Human Rights, Lord (Tariq) Ahmad of Wimbledon launched the report to an audience of civil society, Ambassadors and NGOs today. He said:

“70 years have passed since the Universal Declaration of Human Rights set out the fundamental rights that all people are entitled to.

Today we must continue to fight for the vulnerable and those who are discriminated against for their colour, creed or religion because in too many countries across the world, human rights and the rule of law are not respected.

Standing up for human rights is not only the right thing; it also helps to create a safer, more prosperous and progressive world.”

The report sets out the UK’s actions in a wide range of areas, including a commitment to deliver change for those who are abused, targeted or killed for their beliefs.

Extracts relating to Freedom of Religion or Belief

“As part of our efforts to protect the rights of people of all faiths or beliefs and none, I was honoured to be granted an audience with His Holiness the Pope, and in my new role as the Prime Minister’s Special Envoy for Freedom of Religion or Belief I met with leaders of many different faith communities to discuss what more we can do together to tackle the discrimination faced by religious minorities across the world. It is important to recognise that faith in all its different reflections is part of finding solutions to the many global challenges we face. In the autumn I launched the government’s new £12 million development programme through DFID to support Freedom of Religion or Belief. The independent review of Christian persecution announced by the Foreign Secretary, Jeremy Hunt, in December is a further important new strand of our work.”

“Our plans are already well advanced for our major human rights initiatives of 2019—our review into the persecution of Christians; the prioritisation of Freedom of Religion or Belief; our ‘Defend Media Freedom’ campaign and our ‘Year of Preventing Sexual Violence in Conflict’, which will culminate in a major international conference in November.”

Denial of the right to Freedom of Religion or Belief (FoRB) is a matter of increasing international concern. Violations in 2018 ranged from inhibiting the freedom to worship, for example in the Maldives and Russia, to discrimination or targeted attacks against members of minority groups because of their religious identity, such as in Iran, Iraq, Pakistan, and Burma.

During 2018, 215 million Christians worldwide faced persecution for their faith. Christian women and children are particularly vulnerable, and are often subjected to sexual violence as a result of their beliefs. On 26 December, the Foreign Secretary, Jeremy Hunt, announced that he had asked the Reverend Philip Mounstephen, Bishop of Truro, to lead an independent review of the support which the FCO provides to persecuted Christians. The review will map levels of persecution and discrimination against Christians around the world; assess the impact of the FCO’s current and recent support; and make recommendations.

In July, the Prime Minister , Theresa May, showed her commitment to supporting FoRB by appointing Lord (Tariq) Ahmad of Wimbledon as her Special Envoy on Freedom of Religion or Belief. This new position has enabled the FCO to increase significantly its focus on this universal human right.

As Special Envoy, Lord Ahmad has led international FoRB diplomacy efforts; defended the right to FoRB in key countries where the UK can have a real influence; and responded quickly, along with our diplomatic network, to specific instances where FoRB is under attack.

Lord Ahmad led our efforts to increase advocacy on FoRB with visits to many countries to promote FoRB, including Indonesia, Iraq, Sudan, Tunisia, and Algeria. He met people who had been targeted because of their faith, such as members of the Yezidi and
Christian minorities in Iraq. He also met victims of persecution who now live safely in the UK. During a visit to Egypt in November, Lord Ahmad chaired a round table discussion with Christian and Muslim leaders of the importance of defending FoRB, and announced UK funding for a joint scholarship with Al-Azhar University in Cairo for the academic year 2019/20, to bring Al-Azhar students to study in the UK’s leading universities.

The UK government significantly increased its funding support for FoRB in 2018. Lord Ahmad and Lord Bates launched the UK government’s first ever programme to find innovative solutions to promote and defend FoRB with £12 million of funding to help ensure that all people, irrespective of their religion or belief, are empowered and have equal opportunity to realise their rights.

The FCO also increased its support for FoRB projects, with over £1 million for projects in Iraq, Malaysia, Burma and Sudan. In addition, UK support for the UN Development Programme’s Funding Facility for Stabilisation helped to rebuild communities
in areas liberated from Daesh in Iraq, including in predominantly Christian and Yezidi areas.

Lord Ahmad regularly met representatives of civil society organisations and faith groups in the UK and overseas, to find ways to work together to deliver positive change on FoRB. Through the FCO’s multilateral and bilateral work (including at the UN and OSCE), we regularly spoke out in opposition to discrimination against members of minorities. The UK also co-sponsored the resolution ‘Rights of persons belonging to national or ethnic, religious and linguistic minorities’, which was adopted by consensus in April.

Lord Ahmad also worked to promote FoRB internationally, working closely with key partners such as the Holy See, the EU’s Special Envoy for Promotion of Freedom of Religion, and the UN Special Rapporteur on Freedom of Religion or Belief. In July, Lord Ahmad took part in a high-level ministerial meeting in Washington D.C. with Secretary of State Michael Pompeo, following which the UK and US issued a joint statement calling for the protection of the Baha’is in Yemen.

2018 saw an increasing number of FoRB violations in many parts of the world. In Pakistan, the constitutional discrimination against Ahmadi Muslims, the misuse of blasphemy legislation, and in particular the case of Asia Bibi, made global news. The UK government regularly applied diplomatic pressure on countries which abused their blasphemy laws to target religious minorities. These diplomatic efforts were often not publicised because of the sensitivity of the issue, and of the need to protect those abused and persecuted. The UK did make public statements where we judged doing so was in the best interests of victims, for example when Lord Ahmad met Pakistan’s Human Rights Minister to call for the protection of members of religious minority communities and raised specific cases and concerns.

In Burma, we saw worrying levels of violence in Kachin and Shan states. Much of the violence targeted members of minority groups in particular the Rohingya. We continued to press the Government of Burma on the need for interfaith dialogue and religious tolerance, and to encourage legislative reform as part of this process.

Members of minorities in Sudan continued to suffer, with worrying limitations on religious freedoms, including restricting Christian schools opening days and reports of churches being destroyed. As well as funding FoRB projects, we maintained a regular dialogue with the Sudanese government on these issues and saw success in restrictions being lifted on Christian schools.

In the Middle East, the UK was at the forefront of global efforts to bring Daesh to justice for their crimes, including through our commitment of £1 million in support of an investigative team to collect evidence of Daesh crimes. We supported efforts to help
Christians and other minority groups in Iraq to return home, and in Syria we provided a range of support to help bolster civil society, and promote human rights and accountability. The UK government has provided £252.5 million of humanitarian relief to Iraq since 2014, and £2.71 billion to Syria and Syrian refugees since the start of the conflict. This is the UK’s largest ever humanitarian response to a crisis.

We have serious concerns about deepening crackdown by the Government of China on religious and ethnic minorities, including credible reports of the use of political re-education camps, and widespread surveillance and restrictions targeting particularly Uyghur Muslims. We raised our concerns on a number of occasions, including during China’s Universal Periodic Review at the UN Human Rights Council in November.

In 2019, we will continue to use our diplomatic network to defend FoRB; promote respect between religious communities; and tackle violations of FoRB overseas. We will start to look into the role of education in promoting respect between people of different religions and of no religion, and will develop a toolkit to challenge educational norms which incite violence and hatred.

The UK again worked successfully to help secure consensus on the two religion-related resolutions at the HRC and the UNGA Third Committee: on Freedom of Religion or Belief (led by the EU), and on Combating Intolerance (led by the Organisation of Islamic Cooperation).

Universal Periodic Review
In 2018, the third cycle of the Universal Periodic Review (UPR), a UN process in which the human rights records of UN member states are subject to peer review, entered its second year. As a strong supporter of the UPR process, the UK participated in all reviews (42 in total) in 2018, raising human rights concerns such as freedom of religion or belief,

Council of Europe
The Council of Europe (CoE) remained an important institution for the advancement of UK human rights objectives in Europe. The Minister for Europe and the Americas, Sir Alan Duncan, reaffirmed the value attached by the government to the work of the CoE in a Westminster Hall Debate in April. The Minister for Human Rights, Lord (Tariq) Ahmad of Wimbledon, attended the CoE’s ministerial meeting in Denmark in May, where he ensured that modern slavery and freedom of religion or belief were explicitly referenced in the chair’s proposed list of topics on which the Council of Europe should focus over the coming years.