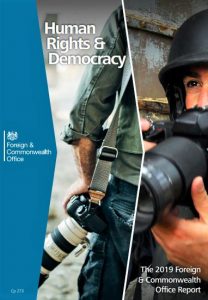 The Human Rights and Democracy report provides an overview of activity in 2019 by the Foreign and Commonwealth Office and its diplomatic network to defend human rights and promote democracy around the world. It also sets out the analysis on country situations and thematic issues which directs that work.

In the Preface, Foreign Secretary Dominic Raab states “We continue to defend Freedom of Religion or Belief, accepting all the recommendations of the report by the Bishop of Truro into the FCO’s work to defend persecuted Christians, which emphasised the importance of freedom of religion or belief for all.”

“We continue to defend Freedom of Religion or Belief”

The Foreword by Minister of State for Human Rights, Lord (Tariq) Ahmad, asserts “Protecting the rights of people of all faiths or beliefs continues to be a top priority. Last year, we backed the creation of a new International Day to Commemorate Victims of Acts of Violence Based on Religion or Belief. In July, at the second Ministerial Conference to Advance Religious Freedom in Washington DC, I announced that the Government would implement all of the recommendations from the Bishop of Truro’s review into the persecution of Christians. We have now implemented 11 of the Bishop’s 22 recommendations under the stewardship of Rehman Chisti MP, who succeeded me as the PM’s Envoy in September 2019.”

Freedom of Religion or Belief (FoRB) was a priority for the UK in 2019. For most of the year, FCO policy on this issue was led by Lord (Tariq) Ahmad of Wimbledon, who served as the Prime Minister’s Special Envoy for Freedom of Religion or Belief, and visited over 13 countries in this capacity and as FCO Minister of State. In September, Rehman Chishti MP was appointed as the Prime Minister’s Special Envoy, undertaking visits to Bahrain and The Holy See, as well as to the Netherlands for the seventh meeting of the Istanbul Process.

In 2019, there were terrorist attacks targeting people of faith, from the attack against the mosques in Christchurch, New Zealand, to the Easter Sunday attacks in Sri Lanka, and the targeting of the Poway Synagogue in the US. The UK has worked closely with all countries concerned. We are now a leading partner on New Zealand’s Christchurch Call to Action. The then Minister of State for Security, Ben Wallace, visited Sri Lanka after the attacks there to offer UK support, and to encourage a response that would bring communities together and ensure the protection of members of minority groups.

The treatment of Uyghurs and other Muslim ethnic minority groups in Xinjiang, China, has been a priority issue. We underlined our serious concerns with China’s restrictions on religion and culture in Xinjiang, including through statements at the UN Human Rights Council (HRC) sessions in March, July and September, and at the UN General Assembly in September. We also raised our concerns about restrictions on wider FoRB in China, including on Christians, in the HRC in March. In July, the UK and 24 other countries registered their concerns about Xinjiang in a public letter to the President of the HRC and the UN High Commissioner for Human Rights. The UK remains deeply concerned about the persecution of Christians, Muslims, Buddhists, Falun Gong practitioners and other religious groups. We also continue to monitor allegations of systematic, state-sponsored organ harvesting of Falun Gong practitioners.

The UK called for the protection and fair treatment of Jehovah’s Witnesses in Russia, and for followers of the Baha’i faith in Iran and Yemen. We used the UN’s Universal Periodic Reviews to draw further attention to restrictions on FoRB, including in Iraq, where we remained committed to working with the Government of Iraq to address issues facing Christians, Yezidis, and other religious minorities.

In a year that saw increasing focus on the rights of India’s minority communities, we continued to discuss with the Government of India the strength that comes from diversity and inclusion. Our project work brought together over 300 young people of different religious backgrounds for interfaith workshops and social action projects in 3 cities in India in 2019.

The situation of religious persecution in Pakistan continued to be of concern. While the Supreme Court of Pakistan upheld the acquittal in January of Asia Bibi, a Christian woman who had been accused of blasphemy, Ahmadi Muslims, Christians, and other minorities continued to suffer severe levels of discrimination and intolerance, with attacks on places of worship, including mosques and churches.

In Myanmar, there were reports of the destruction of places of worship and of forced conversions. We were concerned about laws restricting the freedom to change religion, and about the placing of arbitrary restrictions on places of worship that disproportionately affected Christians and Muslims.

In Afghanistan, religious and ethnic minority groups were regularly targeted by non-governmental groups, in particular in “Islamic State in Khorasan Province”. The rights of minority groups are legally protected in the Afghan constitution, but members of minorities continued to face widespread discrimination and insecurity in Afghan society.

The UK government increased its engagement with faith-based communities in Nigeria, where we have urged the Nigerian government at the highest level to foster social cohesion and peacebuilding.

Following joint UK, US, and Canadian efforts in Sudan, the Government of Sudan in January dropped restrictions on Christian school opening hours. On 20 November, the Sudanese Prime Minister’s Office issued a decree to allow public institutions in Sudan to accommodate the religious rites and ceremonies of non-Muslims.

Working with like-minded partners remained a priority for the UK. In May, the then Foreign Secretary, Jeremy Hunt, welcomed US Secretary of State, Michael Pompeo, to the UK. During the visit, the Archbishop of Canterbury hosted a meeting with UK-based faith leaders to discuss the challenges to FoRB internationally. In July, Lord (Tariq) Ahmad of Wimbledon represented the UK at the second Ministerial to Advance Religious Freedom in Washington DC. Mr Chishti represented the UK at the seventh meeting of the Istanbul Process in The Hague on combatting religiously-motivated intolerance in November, where he stressed the importance of defending the right to FoRB globally.

The UK joined 87 states to co-sponsor a UN General Assembly resolution to create a new International Day to Commemorate Victims of Acts of Violence Based on Religion or Belief. To mark the first International Day on 22 August, we co-sponsored a UN Arria Formula meeting in New York, where Lord (Tariq) Ahmad of Wimbledon delivered a statement from the Prime Minister, Boris Johnson. He said:

Freedom of Religion or Belief is at the heart of what the UK stands for. We are determined to use the tools of British diplomacy in this cause, including our permanent seat on the UN Security Council.

DFID’s £12 million Freedom of Religion or Belief programme, the ‘Coalition for Religious Inequality and Development’ (CREID), is working with local partners to address stigma, social exclusion, and economic exclusion. CREID projects were launched, to counter hate speech, to promote representation of religiously marginalised women in local governance, and to create economic opportunities that foster social cohesion.

The Bishop of Truro published his final report in July, which included 22 recommendations. The government accepted the recommendations – the majority of which related to the principle of supporting FoRB for all, not just Christians – and committed to implementing them. For example, we created a new John Bunyan Fund to support FoRB projects; led cross-Whitehall efforts to mark Red Wednesday (a day dedicated to drawing attention to persecuted Christians around the world); lobbied other countries to appoint FoRB special envoys; and wrote to the British Council, Wilton Park, and Westminster Foundation for Democracy to encourage them to expand their work on FoRB. Mr Chishti leads the implementation of the recommendations from this review.

The UK’s Mission to the UN in New York partnered with NGO Article 19 to enhance multilateral understanding of and support to UN standards on Freedom of Religion or Belief, including by engaging national stakeholders in the implementation of those standards. The project supported the participation of civil society representatives from Bangladesh, Malaysia, Myanmar, and Tunisia in the 7th Istanbul Process meeting in the Hague, held on 18 to 19 November. This furthered UK objectives by ensuring that a diversity of perspectives were represented at the meeting, which focused on combatting intolerance on the basis of religion or belief.

Human rights and the multilateral system

The UK again worked successfully to help secure consensus on the 2 religion-related resolutions at the HRC and the UNGA Third Committee: on Freedom of Religion or Belief (led by the EU), and on Combating Intolerance (led by the Organisation of Islamic Co-operation).

The following country sections include specific references to Freedom of Religion or Belief:

There was no reference to FoRB issues in the following country sections: