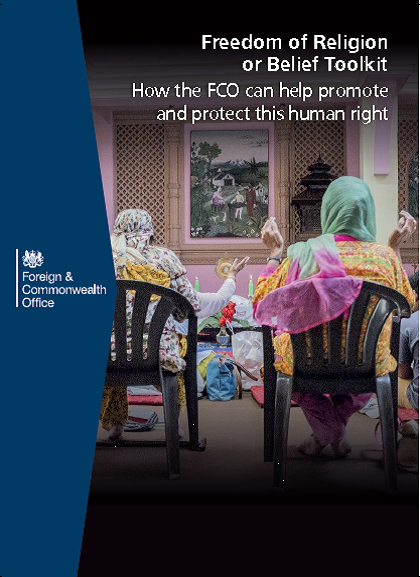 Last week the Foreign Office issued an updated version of its Toolkit, first produced in 2009.

It begins: Freedom of religion or belief is a key human right. The right to adopt a religion, to practice it without hindrance, to share your faith and to change your religion are all key freedoms that everyone should be able to enjoy. Promoting and protecting the right to freedom of religion or belief is an integral part of our human rights work, making a particular contribution to strengthening the rules-based international order, projecting our democratic values and supporting universal human rights, good governance and contributing to conflict prevention. Moreover, its enjoyment plays an important part in achieving the UK’s vision of a more secure and prosperous United Kingdom. It plays a significant role in building societies which are resilient against extremism. It is a sensitive issue in many countries.

These guidelines, elaborated in 2009 and updated in 2016 with the help of specialist stakeholders, aim to provide a simple introduction to the issues for FCO posts and desks, an analytical matrix to identify problems, some general responses to frequently raised issues, and other resources for those who wish to go deeper into the subject.

Under the heading Why is freedom of religion or belief important to the UK? the toolkit states:

The UK Government is firmly committed to promoting and protecting the right to freedom of religion or belief around the world, and to being a strong voice internationally in defence of this fundamental right. Freedom of Religion or Belief (FoRB) is a bellwether human right. It is a fundamental freedom which underpins many other human rights and where FoRB is under attack, often other basic rights are threatened too. In societies where freedom of religion or belief is respected, it is much harder for extremist views to take root. The government has made action to promote and protect FoRB one of the key pledges for our campaign for election to the Human Rights Council in both 2014 and 2016…

It is in the interests of the UK to help people to enjoy freedom of religion or belief and to end discrimination on the grounds of religion or belief. It is also a value that is a key part of the UK’s own heritage and its success as a multi-racial and multi-faith democracy, and a human right that the UK is committed to uphold.