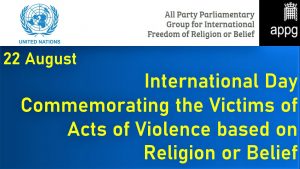 The International Day Commemorating the Victims of Acts of Violence Based is intended to provide a springboard towards an action plan that addresses the growing issue of violence based on religion or belief. The establishment of such a day is not the end goal in itself. It is just the beginning of a larger campaign that ultimately aims to put an end to violence based on religion or belief whenever and wherever it occurs.

GENEVA (21 August 2020) – UN human rights experts* today expressed alarm at a sharp rise during the COVID-19 pandemic of hatred directed at religious communities, who are often being portrayed as a threat to public safety and national identity.

They called on all governments to combat intolerance, discrimination and violence against individuals based on their religion or belief, and said States must do more to support victims of such violence to rebuild their lives and live free of fear of future incidents. This is their statement for the International Day Commemorating the Victims of Acts of Violence Based on Religion or Belief:

“States must recognize the importance of providing victims of acts of violence based on religion or belief, and members of their families, with appropriate support and assistance in accordance with their obligations under the international human rights law. States must establish a comprehensive and inclusive community-based preventive approach, involving a wide set of actors, including civil society and religious communities, in protecting and supporting the victims who suffer from injustice and serious lack of recourse for remedy or redress.

We are alarmed at the continuing discrimination and violence based on or in the name of religion or belief, which disproportionately affects women and girls, persons belonging to religious, ethnic and racial minorities, non-believers, or individuals with dissenting religious or political views, indigenous peoples, LGBT+ persons as well as migrants and refugees. We also recognize that persons belonging to majority communities are also subject to acts of violence based on religion or belief from non-state actors and state repression.

We have seen the sharp rise in hatred directed at different religious communities during the COVID-19 pandemic, including worrying patterns of antisemitism. Minorities and persons facing intersectional discrimination are often portrayed negatively as undermining societal cohesion or as a threat to public safety and national identity and are frequently subjected to acts of violence.

We are concerned that States may also use religion as a means of shaping and reinforcing narrow concepts of national identity or violating other human rights and undermining gender equality. Not only does this destroy the space for rational discourse, but it seeks to polarise and homogenise rather than foster respect for diversity and pluralism.

We stress that freedom of religion or belief and all other human rights, such as the right to freedom of opinion and expression and the right of peaceful assembly, are interdependent, interrelated and mutually reinforcing. States must start the fight against all forms of intolerance and of discrimination based on religion or belief by protecting individuals against incitement to discrimination and violence.

On this International Day commemorating victims of acts of violence based on religion or belief, we stand in solidarity with the victims and survivors. States must do more to support them in rebuilding their lives through redress and rehabilitation processes, which include restitution, rehabilitation, and guarantees of non-recurrence. Victims should have full access to public services while being ensured of their security.

We also stress that States must ensure that the victims’ voices (and those of their families) are heard; establish a victim-sensitive criminal justice procedure, undertake all necessary steps to ensure victims’ security and privacy where necessary; support victims’ organizations and associations, and strengthen the protection of victims’ rights, while always ensuring a gender perspective.

We call on all States to observe this International Day as established by UN General Assembly Resolution 73/296 and to jointly combat intolerance, discrimination and violence against individuals on the basis of religion or belief.”