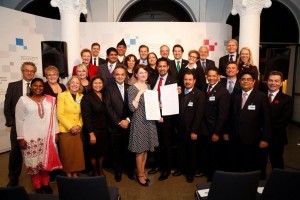 Members of Parliament from across the world have gathered in Oslo to create a new International Panel of Parliamentarians for Freedom of Religion or Belief, and pledged to work together to see an end to belief-based persecution.

The panel’s first action was to sign a charter reaffirming their commitment to freedom of religion or belief as outlined in Article 18 of the Universal Declaration of Human Rights.

Watch the official signing of the charter, which took place on Saturday 8th November at the Nobel Peace Centre, Oslo

Commenting on the creation of the panel, Baroness Berridge said: “I believe that we will have maximum impact as legislators if we work together in a co-ordinated way — Parliamentarians from different countries, holding different religions and beliefs, and from different political parties. This will enable us to share knowledge and information, and challenge our governments about what they are doing to address the suffering of so many. I am extremely encouraged by the diversity of the group that met in Oslo and look forward to the group taking concrete action that will have real impact.”

Background
In the face of rising violations of freedom of religion or belief worldwide, the British All Party Parliamentary Group on International Religious Freedom and the United States Commission on Religious Freedom met in 2013 to discuss what co-ordinated action could take place between Parliamentarians who are concerned about Article 18 rights. The result of this was an initiative to build an international network of legislators committed to advocating against religious persecution and supporting religious freedom for all.

In June 2014 a small initial group gathered together in Oxford, consisting of MPs from a variety of countries and the European Parliament. An agreement was reached to begin to build a wider international coalition, and this plan became a reality in Oslo on 7th November.