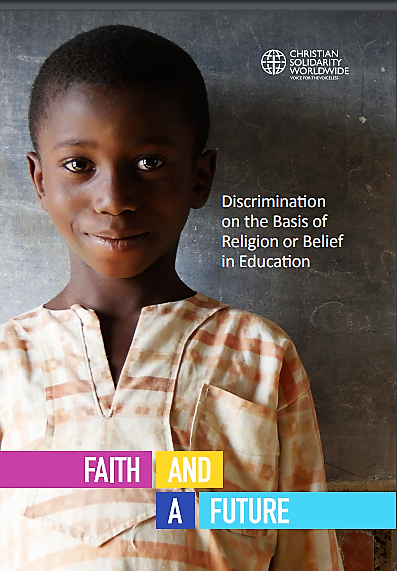 Faith and a Future: Discrimination on the Basis of Religion or Belief in Education, a new report by Christian Solidarity Worldwide (CSW), calls for action to address and end religious discrimination in schools.

The report explores violations of the right to freedom of religion or belief (FoRB) in educational settings in five countries – Burma, Iran, Mexico, Nigeria and Pakistan, where many children experience various forms of mistreatment on account of their faith, or the faith of their parents or legal guardians.

During an event on 27 February in Parliament at the Speaker’s House to launch the report, attendees heard how children and young people in several countries around the world experience discrimination, verbal abuse, physical violence and even forced conversion at school because of their religion or belief.

Cecil Chaudhry Jr, Executive Director of the National Commission for Justice and Peace (Pakistan) spoke about religious intolerance in Pakistan, which is facilitated by curricula that fuel prejudice, and exemplified by the murder of university student Mashal Khan in April 2017 following accusations of blasphemy.

“This intolerance has threatened the entire social fabric of our nation, and we have to begin by improving and truly addressing the biased education system, policies and practices prevalent in Pakistan,” he said.

Other speakers included James Mohajer from the UK Bahá’í Office of Public Affairs, who spoke about the plight of the Baha’i community in Iran, which is often referred to as ‘cradle to grave’ persecution: “Baha’i children do not have an inalienable right to education.”

Mr Mohajer urged the international community to use the platform of the United Nations Human Rights Council (HRC), currently meeting for its 37th session in Geneva, to apply pressure to the Iranian government: “This is the perfect opportunity and platform to call out Iran for what it is doing, not only for Baha’is, but for all religious minorities suffering persecution inside and outside its borders,” he said.

Jim Shannon MP (DUP), co-chair of the All Party Parliamentary Group (APPG) on International Religious Freedom, urged parliamentarians to advance the report’s recommendations and to speak in tomorrow’s parliamentary debate on the UK’s role in promoting freedom of religion or belief at the 37th session of the HRC.

Mervyn Thomas, CSW’s Chief Executive, said: “It is vital that countries where religious discrimination is occurring in educational settings are encouraged to uphold their respective constitutional, national and international obligations with regard to ensuring the right to education and the right to freedom of religion or belief without discrimination. Consequently, our new report includes actionable recommendations to these countries, to the rest of the international community and to international institutions, with a view to addressing violations, and ensuring that children everywhere have the right to a faith and a future.”

More information about the Faith and a Future campaign can be found at http://faithandafuture.com/