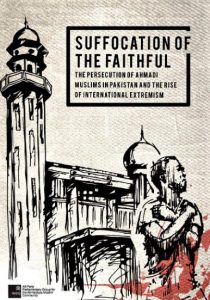 The All Party Parliamentary Group for the Ahmadiyya Muslim Community has launched a new report entitled: ‘Suffocation of the Faithful: Persecution of Ahmadi Muslims in Pakistan and the rise of International extremism’

It is the first of its kind to be written by the APPG in response to the worrying increase of persecution against Ahmadi Muslims and other religious communities in Pakistan.

A number of religious communities including Ahmadi Muslims, Hindus, Christian and Shias have long been victims of persecution in Pakistan due to its discriminatory laws. The laws have stifled freedom of religion, promoted state-sponsored persecution and acted as a catalyst for violent extremism in Pakistan.

As a result, religious communities are denied fundamental human rights to practice their faith and engage in society without fear of harassment, discrimination or violence.

The effects of such persecution are not limited to Pakistan alone, as anti-Ahmadi hate has also surfaced in the UK. The most extreme example of this was the brutal murder in Glasgow of Ahmadi shopkeeper Asad Shah in 2016, who was killed on grounds of faith.

There has also been a worrying development of hate preachers coming to the UK and the rise in hate speech on satellite television, the internet and social media that is feeding intolerance and extremism.