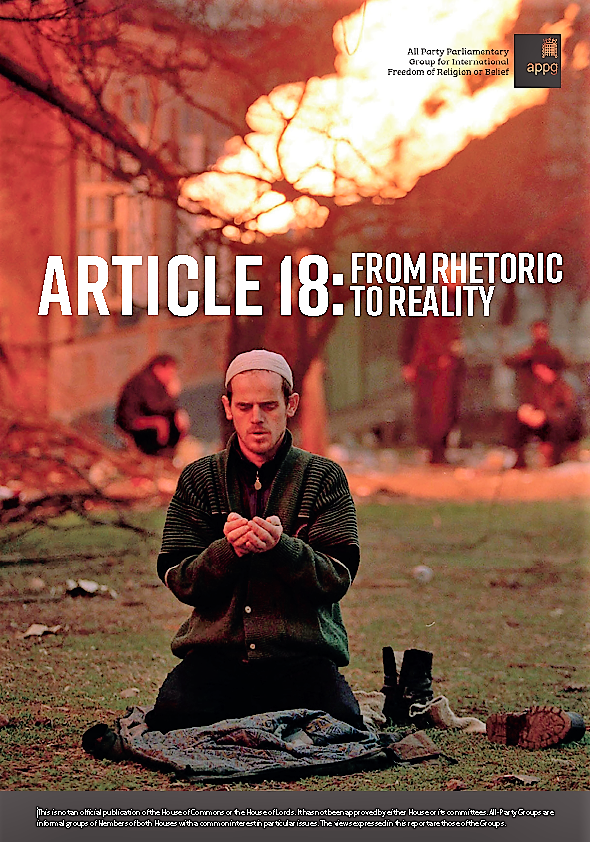 Entitled ARTICLE 18: FROM RHETORIC TO REALITY, it highlights the current rhetoric of the observance of Article 18 of the Universal Declaration of Human Rights and underlines practical measures that can and should be taken by the UK Government to turn this rhetoric to reality to protect the millions who are vulnerable to violence, discrimination and disadvantage as a result of its abuse.

In the Foreword to the report Dr Ahmed Shaheed, United Nations Special Rapporteur for Freedom of Religion or Belief, says “This report comes at a time when acts of intolerance involving religion or belief are on the rise globally… occurring in most continents and in many different cultures – from the potential crimes against humanity being committed against Rohingya Muslims in Myanmar and genocide against vulnerable Iraqi religious groups such as Yazidis, Shabak, Shi’a Muslims and Christians to the banning of religious groups including Jehovah’s Witnesses.

There is no one type of perpetrator or victim. Groups that face persecution in one country may be the persecutors in others. Perpetrators may also be State or non-State actors, and from the latter, mob violence is frequently used to enforce religious or social norms. Despite global commitments to promote and to protect freedom of religion or belief, the scale of violations remains enormous, with almost 80% of the world’s population living in countries with “high” or “very high” levels of restrictions and/or hostilities towards certain beliefs.”

He concludes “This report explores the importance of the right to Freedom of Religion or Belief for Government Ministers and officials including for preventing violent extremism and promoting the sustainable development goals and provides recommendations and best practice for pursuing this right. I urge the UK and other Governments to give serious consideration to implementing what is laid out in this report.”

The report urges that Freedom of Religion or Belief is made a political priority for the Foreign Secretary and a strategic priority for both the Foreign and Commonwealth Office and the Department for International Development.

1) Identify FoRB as a Political Priority of the Foreign Secretary, and establish a FoRB programming funding stream within the Foreign and Commonwealth Office

7) Undertake a baseline evaluation of the extent, quality and impact of FoRB in the Foreign and Commonwealth Office in order to mainstream FoRB throughout work streams

11) Establish a cross-Governmental programme to support pro-FoRB messaging and narratives on and offline.

13) Work with local civil society, including faith and belief-based organisations, to implement conflict reduction programming between religious or belief communities.

MEDIA COVERAGE OF THE REPORT

THE APPG REPORT: ‘Article 18: From Rhetoric to Reality’ House of Lords 18 January

To ask the Secretary of State for Foreign and Commonwealth Affairs, what assessment he has made of the implications for his policies of the recommendations and conclusions of the report of the All-Party Parliamentary Group International Freedom of Religion and Belief, Article 18: From Rhetoric to Reality, published on 25 October 2017.

​The Foreign and Commonwealth Office (FCO) welcomed the publication of “Article 18: From Rhetoric to Reality” by the All-Party Parliamentary Group (APPG) for International Freedom of Religion and Belief. My colleague the Minister for Human Rights, Lord Ahmad of Wimbledon, spoke at the launch of the report on 25th October. The report is a serious and significant contribution to the policy debate on how to promote and defend Freedom of Religion or Belief. The Government is currently evaluating the report, including the recommendations for Government policy and activity and will give its formal response in due course.