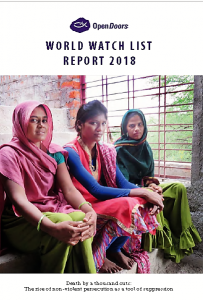 The 2018 Open Doors World Watch List report, launched in the UK Parliament today, highlights the significance of ‘the squeeze’, non-violent persecution, as a tool of oppression.

The report states that Christians are experiencing devastating levels of violence. From widows in Nigeria whose husbands have been killed by Boko Haram fighters, to girls in Pakistan who have been raped, forcefully converted and married against their will, to those caught up in the multiple bomb blasts and shootings in Egypt – the suffering continues.

But, it argues, the suffering goes much deeper. “Of the over 200 million Christians living in countries ranked on the 2018 World Watch List as experiencing a ‘high’ level of persecution or worse,2 the majority are falling victim to non-violent persecution. This is in some ways far more dangerous and debilitating than the violence, because it is insidious and pervades every aspect of life. From the surveillance of Christians in North Korea, to the demolition of churches in Sudan, its aim is to stamp out the Christian faith wherever it is found. What is more, if left unchallenged, the squeeze of non-violent persecution can quickly turn into the smash of violent persecution.”

Where Christians are under pressure, those from other religious minorities, and of no faith, often are too. The report emphasises that Open Doors’ mandate “is to work with Christian communities around the world which are suffering for their faith, but in doing so we campaign for the right to freedom of religion or belief for all, as enshrined in Article 18 of the Universal Declaration of Human Rights. This is a right which must be taken seriously. Speeches and conferences on Article 18 are important – but action is paramount.”

The report argues that 2018 is a pivotal year. Of the Foreign and Commonwealth Office’s 30 priority countries, listed in its latest Human Rights and Democracy Report, 24 are ranked on the 2018 World Watch List. “Persecution in these countries simply will not end without decisive action. It is vital that the UK government uses all its influence – through its foreign policy, aid and trade agreements, and its broader influence within the international community – to ensure that the right to freedom of religion or belief is protected around the world. One opportunity unique to 2018 is the meeting of the Commonwealth heads of government in London.”

“This is a chance for the United Kingdom to lead the way in reminding the nine Commonwealth countries found on Open Doors’ 2018 World Watch List of the importance of the right to freedom of religion or belief.”

The Open Doors World Watch List is the product of year-round field and desk research, providing insight into the trends, scale and stories of the persecution of Christians around the world. In identifying the 50 countries where it is most dangerous to be a
Christian, the research paints a picture of what it is like for a Christian to call one of these countries their home. 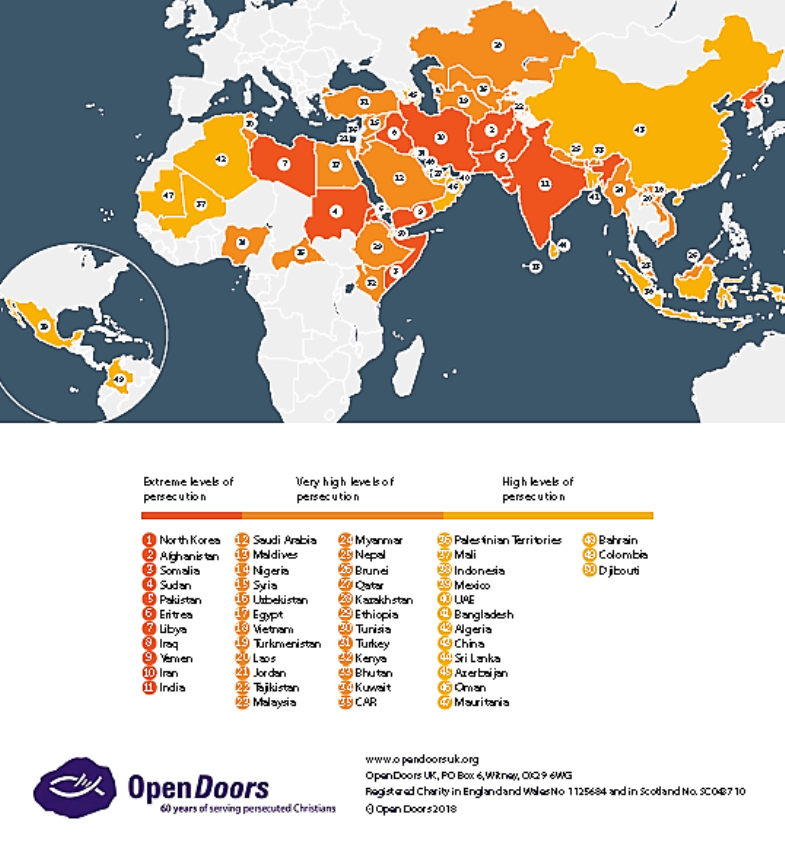