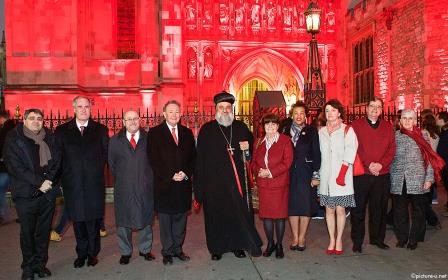 Parliament was among a number of British landmarks floodlit in red yesterday, to honour and acknowledge those suffering persecution for their faith around the world.

The event, dubbed ‘Red Wednesday’, saw buildings – including churches, mosques and synagogues – lit to draw attention to the plight of Christians and other faith groups who are being persecuted.

The date was chosen to coincide with Saint Clement’s Day, which celebrates the early Pope and Christian martyrs, and marked the Parliamentary launch of a new report by the charity Aid to the Church in Need.

The Religious Freedom in the World report looks at 196 countries, highlighting 38 countries in which there have been significant violations of religious freedom in the last two years.

The global study confirmed previous data that shows that the greatest curbs on religious freedoms in Africa, the Middle East and South Asia take place in Muslim-majority countries.

It found that out of the 11 countries experiencing worsening persecution, nine were under “extreme pressure from Islamist violence”, and seven of these experienced persecution at the hands of both militant groups and state-sponsored oppression.

It also noted substantial discrimination against Christians in communist societies such China and North Korea, in India from Hindu nationalists, and from Buddhist nations like Burma.

The report discusses a phenomenon it refers to as ‘hyper-extremism’, seen in groups like Daesh.

ACN describes this as a radical creed, combined with systematic attempts to drive out groups who do not conform to their beliefs. Hyper-extremism involves mass killings “glorying in the brutality inflicted on its victims, which is paraded on social media”.

The study stated: “A virulent and extremist form of Islam emerged as the number-one threat to religious freedom.

“It emerged that a massive upsurge in violence and instability linked to Islamism had played a significant role in creating an explosion in the number of refugees.”

John Pontifex, who edited the report, said: “The atrocities committed by these aggressive Islamist groups in Syria, Iraq, Libya and by their affiliates elsewhere have arguably been one of the greatest setbacks for religious freedom since the Second World War. What has properly been described as genocide, according to a UN convention which uses that term, is a phenomenon of religious extremism almost beyond compare.”

The General Bishop of the Coptic Orthodox Church in the UK, Anba Angaelos, commented on the campaign: “At a time in our contemporary history when we must be most aware of rights and liberties given by God and enshrined in various laws and international conventions, it is unfathomable that some still suffer, are marginalised and persecuted, for the faith they choose to hold, or even reject.”