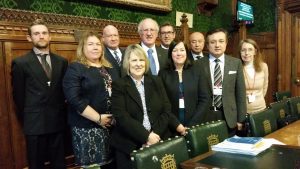 Jim Shannon MP and Fiona Bruce MP hosted a meeting in the Palace of Westminster on 13 December designed to raise awareness about claims of forced organ harvesting from the religious group known as the Falun Gong.

Over the past decade, reports have emerged which claim that the Chinese Government is killing religious prisoners of conscience to supply its vast, lucrative organ transplantation industry. The U.S House of Representatives and the European Parliament have since passed resolutions condemning the practice. The meeting presented the available evidence of forced organ harvesting in China and discussed what steps the UK Government could take to help prevent this practice.

In June 2016 The Independent reported, under the headline China carrying out over 60,000 illegal organ transplants annually, report finds:

The Chinese government continues to illegally harvest organs from millions of its innocent prisoners despite saying it had ended the practice two years ago, a decade-long study has alleged.

Experts estimate between 60,000 and 100,000 organs are transplanted annually, and the majority of the hearts, livers and other organs are obtained by executing prisoners of conscience.

In all, approximately 1.5 million transplants have taken place at 712 liver and kidney transplant centres across China since 2000, with over 300,000 of those taking place at unregulated centres.

The report also found many surgeons had simply “lost count” of the quantity of transplants they had been asked to perform on a daily basis, with some having undertaken as many as six liver removals in one day.

The findings were published in an update to the 2009 book ‘Bloody Harvest’ and the 2014 book ‘The Slaughter’.

Falun Gong is a unique form of meditative practice established in 1992 and the Chinese government has fought to eradicate it for decades.

It has long been believed Falun Gong practitioners are being executed ‘on demand’ by the Chinese government, to compensate for the country’s shortage of organ donors.

The Chinese government officially state that 10,000 organ transplants take place in the country each year, but the trio believe this figure is far lower than the real quantity.

In a statement, Matas said: “We can easily surpass the official Chinese figure just by looking at the two or three biggest hospitals.

“That increased discrepancy leads us to conclude that there has been a far larger slaughter of practitioners of Falun Gong for their organs than we had originally estimated.

“The ultimate conclusion is that the Chinese Communist Party has engaged the state in the mass killings of innocents.”

Falun Gong practitioners were forced to undergo medical tests before their results were put on a database of living organ sources so quick organ matches could be made, the authors claim.

In response to the report, Chinese Foreign Ministry spokeswoman Hua Chunying told a press conference: “I want to say that such stories about forced organ harvesting in China are imaginary and baseless — they don’t have any factual foundation.”

In 2014, China announced that it would end the harvesting of organs from executed prisoners and move to a voluntary donation-based system.