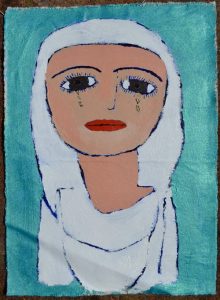 Yezidi women: ISIS survivors is the title of an exhibition presented in Parliament’s Upper Waiting Hall from 26-29 March.

Artist Hannah Rose Thomas travelled last summer to Iraq, where she helped run art classes for Yezidi Women who had escaped ISIS captivity. The aim was to enable these women to share their stories through painting their self-portraits. More

The exhibition displays these self-portraits alongside Hannah’s own gold leaf portraits (below) which aim to convey the dignity and resilience of the Yezidi women, many of whom are still missing loved ones and are unsure of their own future.

There are still probably over 3,000 Yezidis in captivity and they continue to be widely persecuted. The exhibition is in collaboration with Open Doors UK, campaigning for Christians and other minorities through Hope for the Middle East, with Middle East Concern.

Dame Caroline Spelman MP says, “In March 2016 I met a delegation of Yezidi women in parliament. Ever since I’ve been keen to advocate on their behalf and assist in giving them a platform to voice their stories. They, along with Christians and other minorities in the Middle East, continue to face daily discrimination and huge challenges as they seek to reintegrate back into their local communities.”

One Yezidi woman, Nazu, 19, painted red tears streaming down her face to her lips. She explained that her mother used to say that tears are sadness which touches your lips but one day happiness will touch your lips and you will smile again. Nazu has not seen either of her parents since IS took them captive.

TOXIC PAIRING OF VULNERABILITIES
Zoe Smith, Head of Advocacy at Open Doors said: “If this exhibition does nothing else, it highlights the immense vulnerability of religious minorities in the Middle East. These women have suffered so horrendously and in such high numbers because they were from a religious minority that was considered expendable by IS.

“It is this toxic pairing of vulnerabilities – of gender and of faith – which led to the thousands of Yezidi women being forced into sex slavery. And it is not just happening in Iraq – only last week we heard the story of Boko Haram releasing scores of recently captured school girls in Nigeria but chillingly keeping the one Christian girl behind. This double vulnerability is a global phenomenon with the potential to blight the lives of all women within minority religious or ethnic communities. It’s been ignored. It cannot be any longer.”

A VOICE FOR MINORITIES
Rt Hon Alistair Burt MP, Minister of State for the Middle East at the Foreign and Commonwealth Office and Minister of State at the Department for International Development said, “Reading the individual stories are desperately harrowing. It is all very well to understand what has happened to these women in general, but when you read the individual stories of separation and abuse it is all very hard. It’s been important to see. I am very pleased the exhibition is here. I hope that in some way it makes a better contribution for these women and the areas in which they live.” 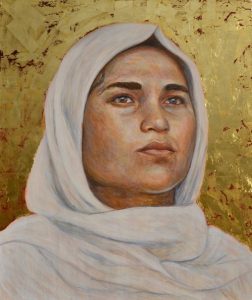 The artist, Hannah Rose Thomas said, “The purpose of the art project was to use art as a tool for advocacy, so I was teaching the women to paint their self-portraits as a way to share their testimonies and their stories of grief. The women themselves know that their paintings are in parliament. To be able to show their paintings here in the place where laws are made – a place of influence that can potentially change people’s hearts and policies towards the Middle East and help minority groups is such a privilege. To give them a voice is an incredible honour.”

Dame Caroline Spelman
Will my right hon. Friend join me in congratulating the young British artist Hannah Rose Thomas and the charity Open Doors? Together they organised the current exhibition in our Upper Waiting Hall to draw attention to the plight of Yazidi women, 3,000 of whom are still in captivity and subject to some form of the slavery that my right hon. Friend has fought so hard to combat.

The Prime Minister
I am very happy to welcome this awareness-raising exhibition, and to commend Hannah Rose Thomas and others who have been involved in bringing the plight of the Yazidi women to the attention of the House and those visiting the House. I know that people felt horror and consternation when they first saw the treatment of the Yazidis, particularly Yazidi women, which is, of course, continuing. As my right hon. Friend says, we must not forget, and we must do everything we can to ensure that those women are freed from what is, as she says, a life of slavery in many cases.

In a radio interview broadcast in the USA, a Yezidi says “The world saw the crime that happened to us.” The reporter comments “Yazidis, still suffering the aftermath of ISIS, believe the world has now turned away.”