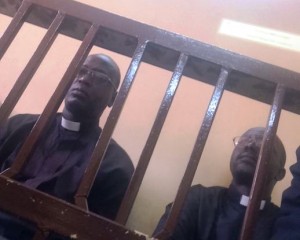 Morning Star News reports that the Rev. Peter Yein Reith and the Rev. Yat Michael were acquitted of the crimes calling for the death penalty on Aug. 5 but were prevented from boarding a plane out of the country the next day. Sudan’s notorious National Intelligence and Security Services (NISS) had ordered the travel ban when they were initially detained – Michael on Dec. 14 and Reith on Jan. 11 – and gave the orders to the airport personnel.

Attorneys for the two pastors have been working for their release since then, but it was not immediately clear why they were released today. Michael and Reith were transported from Juba International Airport to a church in Hai Jebel in Juba, where they attended a thanksgiving service.

World Watch Monitor reported today that Yat Michael and Peter Yen, South Sudanese pastors on trial in Sudan on charges including ‘spying’, have been freed by the Judge of Khartoum North Central Court, Ahmed Ghaboush.

Yat Michael had taken his child to Khartoum for medical treatment when he was arrested on December 14, 2014, after being asked to preach at a local church during his stay. Peter Yen was arrested in January 2015 when he went to enquire about Michael’s whereabouts. The two men were then reported as missing until Sudanese authorities revealed that they were being held in prison for ‘crimes against the state’.

Guilty on some accounts, but freed due to time served
The DPA German news agency reports the judge found Yat Michael guilty of “breach of the peace” (Article 69) and Peter Yen guilty of “managing a criminal or terrorist organisation” (Article 65). But he ordered both released, as they had already served the sentences for these offences by their 8 months in prison.

Experts said there were fears that they would have been convicted of the more serious charges; it was felt the judge was under pressure to balance local expectations on him to uphold the principles of the sharia-governed state, with adherence to international human rights standards.

The families told Radio Tamazuj, an online independent news service broadcast in Sudan and South Sudan, that they were ‘delighted’.

The last time the men were in court was July 23 when their legal team submitted their written closing arguments.
Observers from a number of foreign embassies were present that day. An official from the Sudanese Ministry of Justice told one of the pastors’ lawyers that the extent of outside interest had led the Government to take a very close interest in the case.

Thabith Al Zubir, one of the lawyers defending the pastors, on July 23 had asked the judge to drop the case because the defence had refuted all the accusations levelled against the two men, and because there was no clear evidence against them.

The defence lawyers had also argued that their clients were arrested illegally by the National Intelligence and Security Service (NISS).

In addition, the lawyers raised concern over the fact that Yat Michael and Peter Yen were being tried illegally for insulting religion.
They also said that the pastors were illegally detained for a long period of time without trial. “This is illegal and against the bill of rights in Sudan’s constitution”.

Lawyer Al Zubir had called on the court to respect Sudan’s constitution above the powers of the National Intelligence and Security Service to arrest and detain any person for a long period of time without trial.

Two South Sudanese pastors being held in Khartoum could face the death sentence when their trial is concluded, reports World Watch Monitor.

In February it was reported that Yat Michael and Peter Yen (also named as David Yein Reith in some reports) were held in unknown locations after being arrested during a visit to Khartoum, Sudan’s capital, from their homes in South Sudan.

On 4 May they were charged with a series of offences, two of which – undermining the constitutional system and waging war against the state – carry the possibility of the death penalty or life imprisonment.

Michael was taken into custody on 21 December after preaching that morning at the Sudan Presbyterian Evangelical Church (SPEC) Khartoum Bahri congregation. After the service several men who identified themselves as officers from the National Intelligence and Security Services (NISS) demanded that Michael go with them, and took him away without further explanation.

The next day the security forces went to Michael’s temporary home and took some of his clothes and personal belongings. They informed his wife that he was being held in relation to an ongoing investigation but did not reveal any further details, whether he was under arrest or what the charges were.

Michael and his wife had taken their child to Khartoum, the capital of Sudan, for medical attention but had been asked to preach at a church during their visit, sources told World Watch Monitor.

Yen was arrested on 11 January after he delivered a letter to the Religious Affairs Office in Khartoum asking about his colleague Michael’s arrest in December. Both men belong to the South Sudan Presbyterian Evangelical Church.

Their case was postponed until this week due to the availability of a representative of the NISS. The lawyer representing the two men believes the charges against them will be dropped, but the involvement of the NISS may lead to a different outcome. Nahmia Shaloka, a Sudanese lawyer who left the country because of his human rights activity and now lives in the United States, said the NISS legal advisor will try to connect Michael’s speech at the church to the charges filed against them. “For me there is no evidence,” Shaloka said. “So far the whole thing is to give their [the NISS] action legal justification. The NISS claim to have evidence and this will be clear at the hearing on May 19.”

According to Amnesty International, the NISS is an agency that is above the law. Priscilla Nyagoah, a campaigner for Sudan and South Sudan at Amnesty International’s regional office in east Africa, said in a recent blog that the Sudanese parliament amended its constitution in January to extend NISS’ mandate to perform duties currently carried out by the armed forces and law enforcement agencies, adding that the amendment doesn’t require the agency to abide by relevant international, regional and domestic law. “Conferring an intelligence agency such as the NISS with such a mandate, in addition to its already extensive powers of arrest, detention, search and seizure under the National Security Service Act, is particularly alarming,” Nyagoah wrote.

Nyagoah is calling for a human rights-compliant legal framework for the NISS, which would subject its arrest and detention practices to judicial oversight, and ensures that NISS agents perpetrating human-rights violations are held to account. The African Commission on Human and Peoples’ Rights recently sent out a message against the impunity of the NISS, by declaring the Republic of Sudan guilty of violating the rights of three human-rights defenders while in NISS detention in November 2008. The decision, published in February this year, requests Sudan to pay adequate compensation to Monim Elgak, Amir Suleiman and Osman Hummeida and to prosecute all those responsible for the illegal incarceration and torture of the three.

At the continuation of their trial on Tuesday, Michael and Yen will stand charged with disclosure and receipt of official information or documents, arousing feelings of discontent among regular forces, breach of public peace, and offences relating to insulting religious beliefs. They also will face charges of undermining the constitutional system, and waging war against the state, which carry the possibility of harsher penalties.

The church in Khartoum that Michael had been preaching at has suffered pressure from government authorities over land rights, resulting in most of the church being destroyed in December last year.

This is not the first time this year that a church building has been demolished by Sudanese authorities. In February and June 2014, churches were destroyed in Omdurman and Khartoum.

While South Sudan has a largely Christian population, Sudan is predominantly Muslim. However, many thousands of Southern Sudanese who fled the long civil war to live in the north are now so rooted there, they choose to remain. There are still churches in the north to meet their needs, although some have come under pressure in recent months.

Sudan’s minister of religion, Shalil Abdullah, has said that the authorities would not issue permits for the construction of new churches.

After the start of the trial of Yat Michael and Peter Yen on 19 May, on 31 May the trial was adjourned until June 15 to give prosecutors more time to try building a case, a defence attorney said.

On 15 June sources said that prosecutors produced no new evidence. Christian Solidarity Worldwide reported that the defence attorneys have also been denied access to the pastors since the transfer to the high-security prison. NISS has assigned them to separate cells to put more psychological pressure on them in the face of the widespread attention their case has garnered from the international community, media and right groups, sources said. The court heard the defence’s presentation as well as the case for the prosecution at today’s hearing, relatives said, but did not issue a ruling. The attorney defending the two pastors said the trial was going well.

On 18 June Middle East Concern reported that the prosecution produced one person who gave testimony, but brought no new evidence against the pastors.

On 25 June the prosecution produced one person who gave testimony, but brought no new evidence against the pastors. The hearing on 2 July saw the judge question Pastor Yat and Pastor Yen, focusing on why they should be involved in Christian ministry in an Islamic country, and decided their case would continue to trial.

On 14 July lawyers presented the case for the defence. There were two witnesses, an IT expert and a retired army general. The pastors have stated that some of the ‘incriminating’ documents allegedly found on their computers are not theirs. The IT expert testified as to how easy it would have been for others to plant the documents on their computers without their knowledge. The retired general testified that the documents used as evidence against the pastors are in the public domain and are not related to military or other state secrets as had been alleged.

The verdict is expected during a hearing on 5 August.

Middle East Concern report that observers from a number of foreign embassies were present at the 14 July hearing. An official from the Sudanese Ministry of Justice told one of the pastors’ lawyers that the extent of outside interest has led the Government to take a very close interest in the case.

In a further development, Middle East Concern report that on 1 July Pastor Hafez of the Evangelical Church in Bahri (where Pastor Yat preached before his arrest) and Mohaned (the lawyer not only for the two pastors but also for the church) were arrested and detained briefly before being released on bail.

The lawyer was driven to the police station but the pastor was made to walk there in handcuffs – a deliberate attempt to humiliate him. During his detention Pastor Hafez was hit on the side of his head with a gun. After his release he needed to go to hospital for x-rays. It is not yet known when the case against Pastor Hafez and the lawyer will be brought to court.