Nationalist parties and organizations played an increasing role in harassment of religious minorities, especially in Europe, the report highlights. 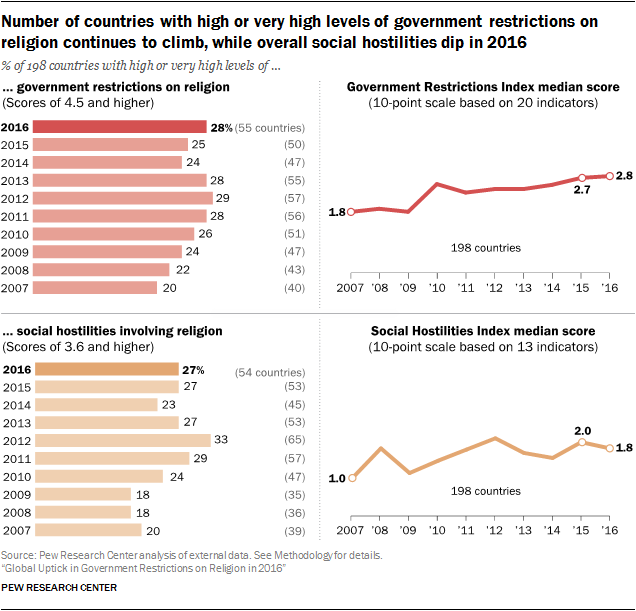 In many countries, restrictions on religion resulted from actions taken by government officials, social groups or individuals espousing nationalist positions. Typically, these nationalist groups or individuals were seeking to curtail immigration of religious and ethnic minorities, or were calling for efforts to suppress or even eliminate a particular religious group, in the name of defending a dominant ethnic or religious group they described as threatened or under attack. In the Netherlands, for instance, Geert Wilders’ Freedom Party announced an election platform in 2016 that called for the “de-Islamization” of the country, including barring asylum seekers from Islamic countries, prohibiting Muslim women from wearing headscarves in public, closing all mosques and banning the Quran. In another case, the Czech group Block Against Islam (which opposes allowing Muslim refugees into the country and calls for restrictions on the Muslim community) organized about 20 anti-Islam rallies around the country during the year.

Government actors – whether political parties or individual public officials – at times used nationalist, and often anti-immigrant or anti-minority, rhetoric to target religious groups in their countries in 2016. About one-in-ten (11%) countries had government actors that used this type of rhetoric. This marks an uptick from 2015, when 6% of cases involved political parties or officials that espoused nationalist views.

Overall, Muslims were the most common target of harassment by nationalist political parties or officials in 2016, typically in the form of derogatory statements or adverse policies. Nationalist parties also singled out Jews, Christians and members of other minority faiths. In Bulgaria, Jehovah’s Witnesses reported an ongoing campaign against their religion by two nationalist parties, the National Front for the Salvation of Bulgaria and the Internal Macedonian Revolutionary Organization, which together form the Patriotic Front political alliance in the country’s legislature. And, in Sweden, representatives of the Sweden Democrats Party made anti-Semitic and anti-Muslim remarks on multiple occasions during the year. 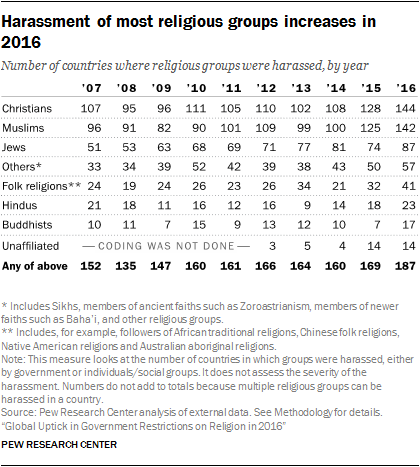 All information from Pew Research Center