Social hostilities involving religion, including violence and harassment against religious groups by private individuals and groups, declined in 2019, according to Pew Research Center’s 12th annual study of global restrictions on religion, which examines 198 countries and territories.

In 2019 – the most recent year for which data is available, covering a period before the disruptions accompanying the coronavirus pandemic – 43 countries (22% of all those included in the study) had “high” or “very high” levels of social hostilities. That is down from 53 countries (27%) in 2018, and from a peak of 65 countries (33%) in 2012. These figures have fluctuated since the study began in 2007, but the number of countries with at least “high” levels of social hostilities related to religion is now the lowest since 2009. 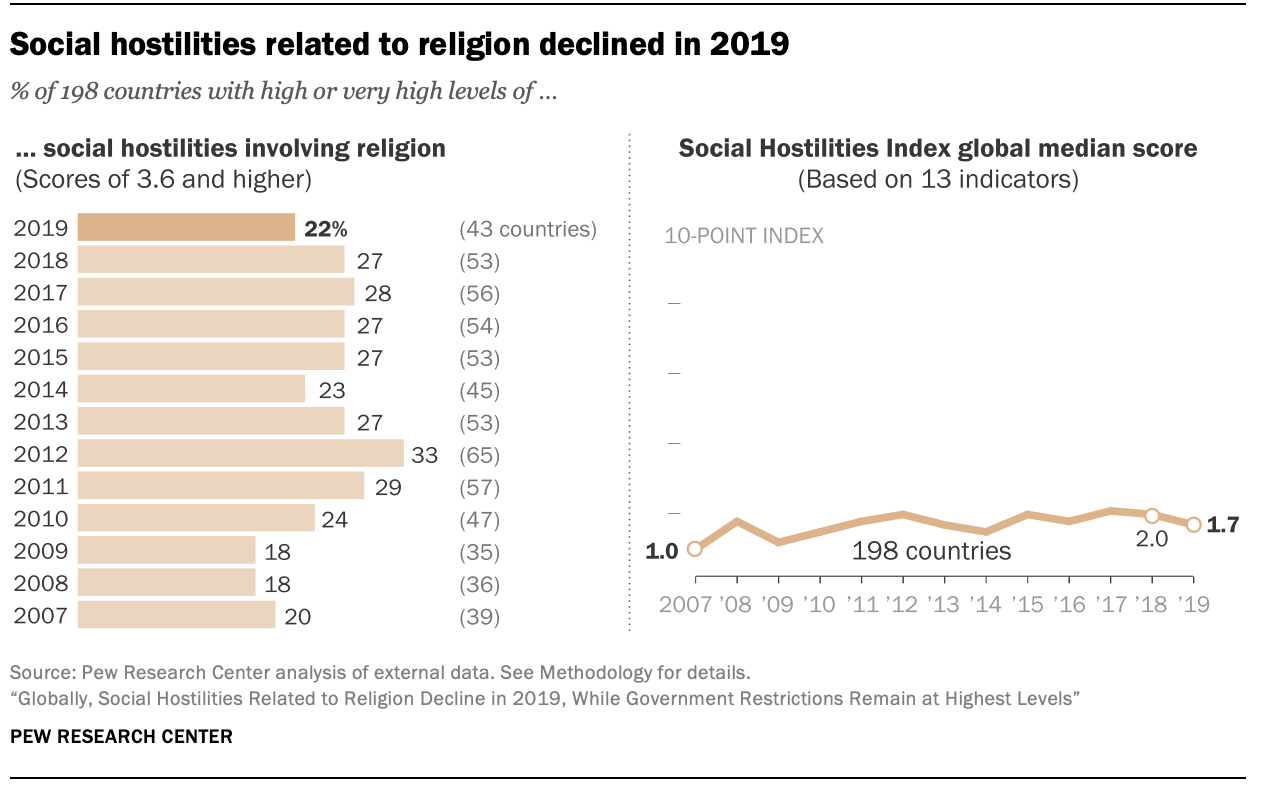 A drop in the number of countries experiencing religion-related terrorism (including deaths, physical abuse, displacement, detentions, destruction of property, and fundraising and recruitment by terrorist groups) is among the factors behind the decrease in social hostilities. In 2019, 49 countries experienced at least one of these types of religion-related terrorism, a record low for the study.

In addition to looking at social hostilities relating to religion, this annual study also examines government restrictions on religion – including official laws, policies and actions that impinge on religious beliefs and practices – in 198 countries and territories.

The analysis shows that government restrictions involving religion, which in 2018 had reached the highest point since the start of the study, remained at a similar level in 2019. The global median score on the Government Restrictions Index (GRI), a 10-point index based on 20 indicators, held steady at 2.9. This score has risen markedly since 2007, the first year of the study, when it was 1.8. 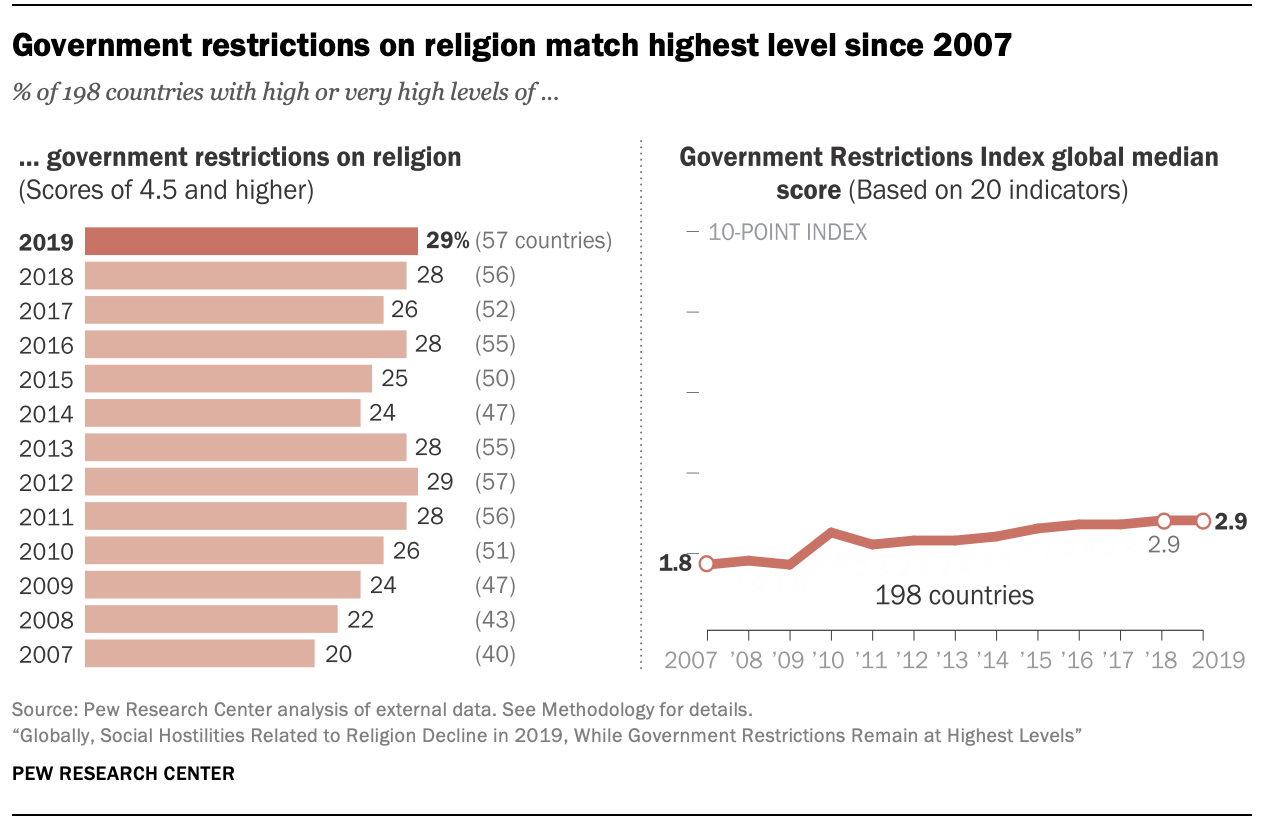 Government harassment of religious groups and interference in worship increased

180 countries – 91% of all countries in the study – had at least one instance, at some level, of government harassment against religious groups. 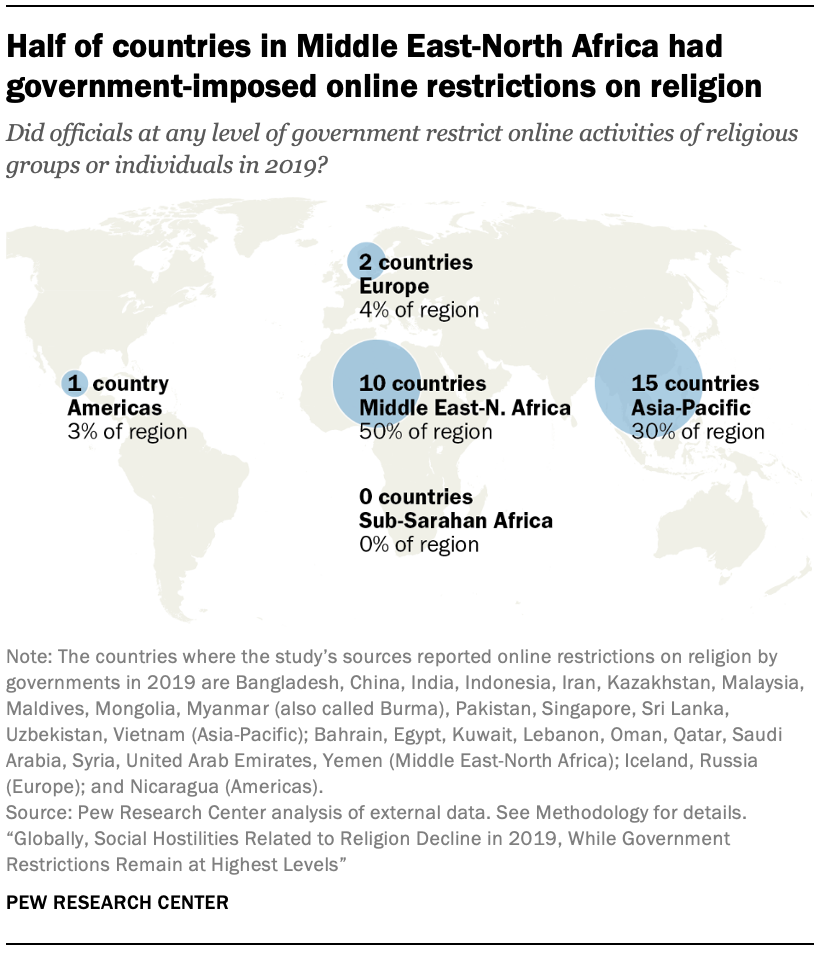