The Pew Research Center’s tenth annual report dives deeper into the ways government restrictions on religion and social hostilities involving religion have changed, from 2007 to 2017.

The latest data shows that 52 governments – including some in very populous countries like China, Indonesia and Russia – impose either “high” or “very high” levels of restrictions on religion, up from 40 in 2007. And the number of countries where people are experiencing the highest levels of social hostilities involving religion has risen from 39 to 56 over the course of the study.

Government restrictions have risen in several different ways. Laws and policies restricting religious freedom (such as requiring that religious groups register in order to operate) and government favoritism of religious groups (through funding for religious education, property and clergy, for example) have consistently been the most prevalent types of restrictions globally and in each of the five regions tracked in the study: Americas, Asia-Pacific, Europe, Middle East-North Africa and sub-Saharan Africa. Both types of restrictions have been rising; the global average score in each of these categories increased more than 20% between 2007 and 2017.

Meanwhile, a fourth category of social hostilities – interreligious tension and violence (for instance, sectarian or communal clashes between Hindus and Muslims in India) – has declined markedly since the baseline year (17%). By one specific measure, in 2007, 91 countries experienced some level of violence due to tensions between religious groups, but by 2017 that number dropped to 57 countries.

These trends suggest that, in general, religious restrictions have been rising around the world for the past decade, but they have not been doing so evenly across all geographic regions or all kinds of restrictions. The level of restrictions started high in the Middle East-North Africa region, and is now highest there in all eight categories measured by the study. But some of the biggest increases over the last decade have been in other regions, including Europe – where growing numbers of governments have been placing limits on Muslim women’s dress – and sub-Saharan Africa, where some groups have tried to impose their religious norms on others through kidnappings and forced conversions.

In the Asia-Pacific region, government favoritism of particular religious groups also has increased since 2007. In Thailand, a new constitution came into force in 2017 with a provision that elevates the status of Theravada Buddhism by mandating “special promotion” through “education, propagation of its principles, and the establishment of measures and mechanisms ‘to prevent the desecration of Buddhism in any form.’” There also has been an increase in Asian governments deferring to religious authorities, texts and doctrines since 2007. For instance, in Turkey, the government passed a law in 2017 giving Muslim religious authorities at the province and district level the authority to register marriages and officiate at weddings on behalf of the state. The government contended that this would make the registration process more efficient, while critics argued that it violated principles of secularism in the country’s constitution and did not meet the needs of other (non-Muslim) religious groups.

Most countries with the highest scores in government favoritism as of 2017 (including Afghanistan, Bahrain and Bangladesh) have Islam as their official state religion. This dovetails with an earlier finding that, as of 2015, Islam is the most common state religion around the world; in 27 of the 43 countries that enshrine an official religion (63%), that religion is Islam.

But not all the countries on this list favor Islam. In Greece, Iceland and the United Kingdom, different Christian denominations are the official state religions. The Greek government recognizes the Orthodox Church as the “prevailing religion” and funds the training of clergy, priests’ salaries and religious instruction in schools. Iceland’s government provides the official state Evangelical Lutheran Church with financial support and benefits not available to other religious groups. And in the UK, the monarch is the supreme governor of the Church of England, and must be a member of that church.

At the country level, one of the largest increases since 2007 in the favoritism category occurred in the Pacific island nation of Samoa. In 2011, the Samoan government began to enforce a 2009 education policy that makes Christian instruction mandatory in public primary schools. And, in 2017, Samoa’s parliament amended the constitution to define the country as a Christian nation. 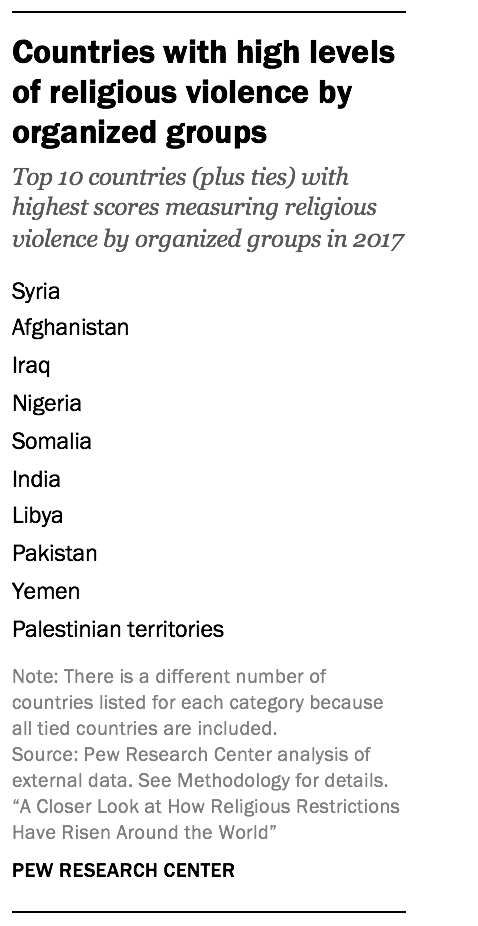