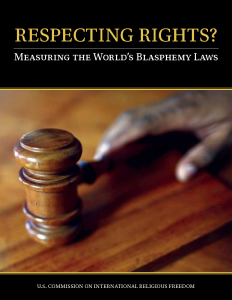 Blasphemy is defined as “the act of insulting or showing contempt or lack of reverence for God.”

According to the study: 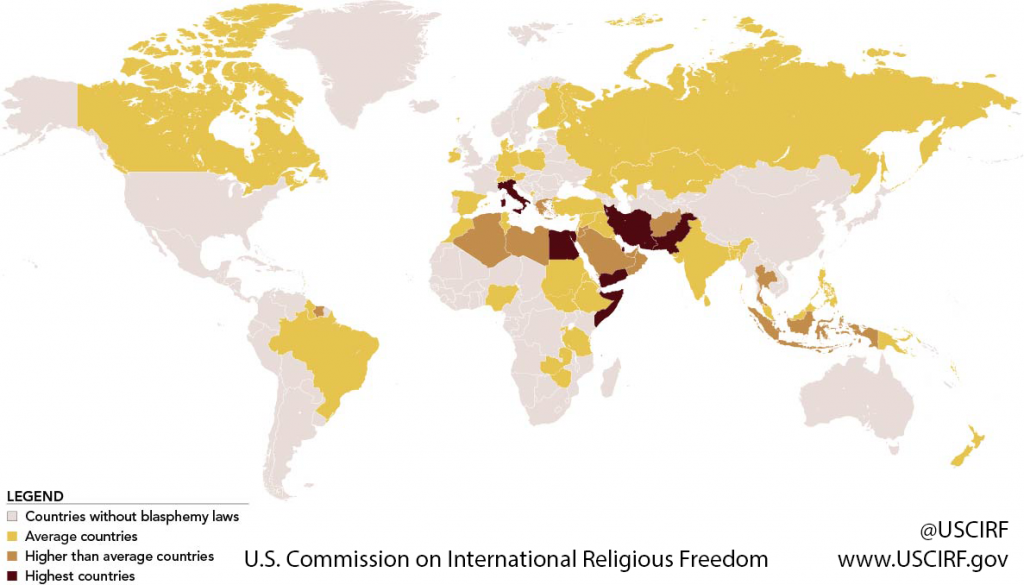 Dozens of countries from all corners of the globe retain laws which punish blasphemy and most of them punish the ‘crime’ severely, according a report from the US government.

The paper, from the US Commission on International Religious Freedom, was entitled Respecting Rights? Measuring the World’s Blasphemy Laws. Its authors said blasphemy laws were “astonishingly widespread”. They found laws restricting freedom of expression on religious issues in 71 countries.

Two of those featured – Denmark and Malta – have recently repealed their laws. But elsewhere the report appeared to have underestimated the scale of the problem, as it did not include Northern Ireland or Scotland. The National Secular Society played a vital part in their repeal in England and Wales in 2008.

Every country featured was criticised for “deviating from some international human rights law principles”. Most of the laws deviated from “a significant number” of those principles.

Around a quarter of the laws found were in the Middle East and North Africa; another quarter were from Asia and the Pacific. More than a fifth were in Europe, with 15.5% coming from sub-Saharan Africa and 11.2% from the Americas.

An overwhelming majority of the laws were found in national penal codes. The report said punishments ranged from “moderately to grossly disproportionate”. Fifty-nine states sanctioned a prison sentence for ‘blasphemers’; some imposed other sentences such as lashings and forced labour.

The laws were ranked according to a series of indicators, including how far their language threatened freedom of expression; how severe the penalty was; and how far they were used to discriminate against minority groups. These showed how far they deviated from international human rights principles.

The authors said the laws often put particular strain on “the forum, either public or private, in which a person can express or display his/her opinions or beliefs and control written or spoken words”. They also said the legislation was often vaguely worded, with only one-third of the criminal laws specifying that intent must be part of the ‘crime’.

The six countries with the most severe blasphemy laws were all Muslim-majority countries. Iran and Pakistan were given the worst rankings, mainly because both countries’ laws explicitly allow the death penalty for insulting Muhammad. They were followed by Yemen, Somalia, Qatar and Egypt.

In some cases, the rankings underestimated the reality of the impact of a country’s blasphemy laws. For example, in Afghanistan, Saudi Arabia and Eritrea, there was no sanction specified in written law. This meant none of those countries were given points on the indicator for the severity of the punishment. But their laws mean the punishment can be prescribed in other laws or open to judicial interpretation.

This has particularly harsh consequences in Saudi Arabia, where judges often impose long prison terms or public floggings for ‘blasphemers’. In April a man arrested on a blasphemy charge was sentenced to death for apostasy.

The report also said: “In states where there are unresolved conflicts between two or more religious groups, accusations of blasphemy can be used as a tool to strengthen one group’s power over another”. And in countries such as Pakistan and Bangladesh, ‘blasphemers’ are often punished through extrajudicial actions and mob ‘justice’.

Italy, which came seventh on the list, had the most severe blasphemy laws in Europe. In 2015 an Italian court upheld a fine imposed on an artist who had publicly depicted a sexual act involving the former Pope Benedict and one of his clerical advisers. The judgment said religion could be legitimately criticised by qualified people with relevant experience.

Most European states which have blasphemy laws on the books rarely invoke them. Ireland, which introduced a blasphemy law in 2009 and has not convicted anyone for the offence since, was the lowest-ranked country.

But Mairead McGuinness, an Irish politician who works as vice-president of the European Parliament, has said blasphemy laws weaken European politicians’ ability to protect ‘blasphemers’ abroad. “The local authorities frequently accuse us of hypocrisy,” she said.

Responding to the report Chris Sloggett, the NSS’s communications officer, said: “Blasphemy should never be illegal. Religious ideas should be as open to challenge, insult or ridicule as any other.

“This report – which, in places, understates the damage done by blasphemy laws – is an important reminder of the pointless punishment which many face for speaking their minds. It highlights the work that needs to be done around the world to protect free expression.

“And it should nudge countries that retain these laws to realise they are not harmless, as they undermine international standards on free expression and solidarity with free thinkers.”

Over a third of the world’s countries have blasphemy laws that violate at least one internationally recognised human rights principle, according to a new report by the US Commission on International Religious Freedom (USCIRF).

Most blasphemy laws are “embedded in criminal codes” and are “vaguely worded”, with “unduly harsh penalties for violators”. Of the 71 countries with blasphemy laws, 86% prescribe imprisonment for convicted offenders, while some, like Pakistan and Iran, even prescribe the death penalty.

Over a third of the world’s countries have blasphemy laws that violate at least one internationally recognised human rights principle, according to a new report by the US Commission on International Religious Freedom (USCIRF).

USCRIF notes that all five of the nations that “deviate the most from human rights principles” – Iran, Pakistan, Yemen, Somalia and Qatar – have an official state religion.

In Muslim countries like Pakistan, which is perhaps the most notorious for its blasphemy laws, Christians are often the subject of the accusations – disproportionately so compared to their population size. For example, Pakistani Christians make up only 1.5 per cent of the total population, but over a quarter (187) of the 702 blasphemy cases registered between 1990 and 2014 were against Christians, noted Pakistani newspaper Dawn in 2015.

Recently, several blasphemy cases have been registered against Christians related to their actions on social media. For example, in September 2016, a 16-year-old Christian boy was accused of blasphemy after “liking” and sharing a post on Facebook which “defamed and disrespected” the Kaaba in Mecca, the building at the centre of Islam’s most sacred mosque. He has since twice been refused bail, despite his lawyers’ insistence that, as a child with no prior convictions, he should be released.

A 2011 Pew survey found that only 16 per cent of Pakistanis had a positive view of Christians. Because most Pakistani Christians come from low socio-economic backgrounds, they are often subject to criminal violence, and are sometimes accused of committing blasphemy by people who want to settle personal scores or take their land or property.