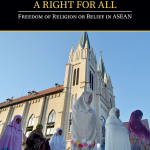 A new report from USCIRF emphasises the strategic importance of robust U.S. engagement on these issues with ASEAN as a collective and the 10 individual Member States: Brunei, Burma, Cambodia, Indonesia, Laos, Malaysia, the Philippines, Singapore, Thailand, and Vietnam.

The countries of Southeast Asia—bound together in the regional bloc known as the Association of Southeast Asian Nations (ASEAN)—are vastly diverse in their geographic size, governing systems, economies, and cultural and societal heterogeneity.

Also, each country is different in its degree of adherence to international human rights standards and its protection (or denial) of the freedoms therein, including the universal freedom of religion or belief.

In ASEAN’s 50th year, the U.S. Commission on International Religious Freedom (USCIRF) presents A Right for All: Freedom of Religion or Belief in ASEAN. The report documents ASEAN’s and the Member States’ approaches to this fundamental right, underscores the religious freedom-related chal­lenges in the region that transcend country borders, and emphasizes the strategic importance of robust U.S. engagement on these issues.

ASEAN’s approach to human rights often has been diminished by two competing interests: the Member States’ desire to integrate as a bloc and their deeply embedded reliance on independence and non-interference in one another’s affairs. In an increasingly interdependent, interconnected com­munity such as ASEAN, it is vital that governments and societies recognize—both within and across their borders—when the right to freedom of religion or belief is being abused and take steps to protect indi­viduals and groups whose rights are violated.

ASEAN and the individual Member States have an inconsistent record protecting and promoting human rights, and even more so with respect to freedom of religion or belief. Often, ASEAN countries have lacked cohesion and a strong will to act in response to seri­ous violations within their own borders and among the other members of the bloc.

Key findings about freedom of religion or belief in the 10 Member States include:

Brunei: The identification of the state and the public sphere with Islam in the person of the sul­tan sometimes challenges the religious freedom of non-Muslims or heterodox Muslim residents, whose communities may be banned or ruled by Shari’ah despite their affiliation.

Burma: While the year 2016 marked a historic and peaceful transition of government in Burma, outright impunity for abuses committed by the military and some non-state actors and the depth of the humanitarian crisis for displaced persons continue to drive the ill treatment of religious and ethnic groups.

Cambodia: Cambodia has few internal challenges with freedom of religion or belief, but could do more to uphold its human rights commitments, particularly under the Refugee Convention.

Indonesia: The Indonesian government often intervenes when religious freedom abuses arise, particularly if they involve violence. Non-Mus­lims and non-Sunni Muslims, however, endure ongoing difficulties obtaining official permission to build houses of worship, experience vandalism at houses of worship, and are subject to discrim­ination as well as sometimes violent protests that interfere with their ability to practice their faith.

Laos: In some areas of Laos, local authorities harass and discriminate against religious and ethnic minorities, and pervasive government control and onerous regulations impede freedom of religion or belief.

Philippines: With the strong influence of the Catholic Church, as well as the needs of other religious groups, the Philippines grapples with the separation of church and state, and also with the violence that continues to dominate relations with Muslims on the island of Mindanao.

Singapore: Singapore’s history of intercommunal violence informs its current policies, which prior­itize harmony between the country’s major reli­gions, sometimes at a cost to freedom of expression and the rights of smaller religious communities.

Thailand: The primacy of Buddhism is most problematic to freedom of religion or belief in the largely Malay Muslim southern provinces, where ongoing Buddhist-Muslim tensions contribute to a growing sense of nationwide religious-based nationalism.

Vietnam: Vietnam has made progress to improve religious freedom conditions, but severe viola­tions continue, especially against ethnic minority communities in rural areas of some provinces.

The 10 Member States experience a number of com­mon and crosscutting challenges that underscore how violations of freedom of religion or belief occur across borders and within the context of broader and related regional trends. ASEAN should acknowledge and work to address the following problems: protection gaps for refugees, asylum seekers, trafficked persons, and those internally displaced; the use of anti-extremism and antiterrorism laws as a means to limit religious communities’ legitimate activities, stifle peaceful dissent, and imprison people; the use of nationalistic sentiment by individuals and groups who manipulate religion to the detriment of other religious and ethnic groups; arrests, detentions, and imprisonments based on religious belief, practice, or activities; and the exis­tence and implementation of blasphemy laws that are used to incite or inspire violence, generally by mem­bers of a majority religious group against those from a religious minority community.

ASEAN and the individual Member States must understand that the global community of nations is grounded in the premise that everyone observe a rules-based international order, which includes the responsibility to uphold freedom of religion or belief and related human rights. This means ASEAN and the Member States should take steps to: