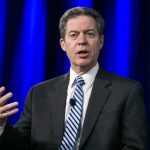 The announcement by President Trump that he will appoint Sam Brownback, Governor of Kansas, as the US Ambassador-at-Large for International Religious Freedom has drawn a wide range of responses.

It was warmly welcomed by USCIRF:

USCIRF Chairman Daniel Mark stated that, “The Ambassador-at-Large for International Religious Freedom is a vital post and Gov. Brownback is an outstanding choice for it. The person who fills this position will be America’s primary voice for the freedom of religion abroad and Gov. Brownback has impressive qualifications in this area. The Ambassador-at-Large also plays a key role in USCIRF’s work as an ex officio member of the Commission, so we look forward to working with him.”

While in the Senate, Gov. Brownback consistently supported religious freedom and human rights for all, serving as co-chair of the Congressional Human Rights Caucus.  His record included: legislation condemning Iran for its treatment of Baha’is; sanctions on Vietnam for human rights abuses; legislation to protect religious communities in Russia; and actions providing for humane treatment of immigrant detainees. In addition, he was a key sponsor of the 1998 International Religious Freedom Act that established USCIRF and the State Department’s Office of International Religious Freedom.

In May 2000, then Sen. Brownback chaired a Senate Foreign Relations Committee hearing to review the first USCIRF annual report. He described an atmosphere that was more open to a public discussion of religious freedom. He added that he hoped it was not a “cyclical thing, but rather something…on a trajectory toward growth, that we recognize this most fundamental of human rights.”

“We are very pleased that President Trump has made this selection,” added Chairman Mark. “Gov. Brownback understands that religious freedom violations must be sharply highlighted and that progress must be clearly recognized, precisely what USCIRF aims to do in its work. We hope that the Senate confirms his nomination swiftly.”

But a blog from Erasmus in The Economist highlighted the doubts of many:

Donald Trump has made big waves with his nomination for the post of ambassador for issues of liberty of belief—the person who heads the department’s religious-freedom bureau and issues an annual survey (both of government oppression and “societal” persecution like the case just mentioned), a work which carries great authority.

Conservatives, especially on the Christian right, are pleased by the selection while those who watch the religious scene from a more liberal standpoint are in a state of shock.

For most people, the contentious thing is Mr Brownback’s passionate embrace of the cause of “religious freedom” in the domestic American sense. For example, earlier this year the governor addressed a rally in Kansas that defended the right of a Christian florist to withhold her services from a same-sex wedding. He has also made a series of alterations to the state law on abortion, including signing a bill which would require doctors to give detailed information about their qualifications before carrying out a termination.

Some (including Jews and Muslims in his home state) have voiced the fear that if confirmed in his new job, he will focus on the rights of Christians instead of promoting freedom for all beliefs, including atheism, as the job supposedly requires.

Mr Brownback seemed to anticipate those criticisms in an emotional public appearance after receiving the nomination. The governor, who became Catholic in 2002 but sometimes attends an evangelical church, began by declaring he had just done something for which people in certain parts of the world could be put to death: he had taken part in holy communion, Christianity’s most important rite.

Without denying that the welfare of Christianity would be his special concern, he said he would be inspired by the maxim of Mother Teresa, who had said she loved all religions, but was “in love with” her own faith alone. Among the professional diplomats whose job is to investigate and document the religious situation as objectively as possible in over 190 countries, those words won’t be completely reassuring.

President Trump’s choice of Governor Brownback as IRF ambassador at-large is a welcome reminder of the importance this administration — and our country — places on religious freedom. The Senate would do well to quickly confirm their former colleague.

There was disagreement from Peter Henne, formerly of the Pew Research Centre, who wrote under the headline:

Why Religious Freedom Advocates Should Be Concerned About Sam Brownback

With Sam Brownback’s appointment as U.S. International Religious Freedom Ambassador (IRF), many religious freedom advocates may be slightly hopeful. Donald Trump made a relatively quick appointment for a human rights position, one that has tended to be downplayed in previous administrations. But Brownback will be at best an ineffective and at worse a counterproductive champion of religious freedom. All religious freedom advocates should be concerned about this move, and the broader human rights community should be worried.

Just a word about where I am coming from on this. Prior to becoming a professor, I ran the Pew Research Center’s work on global religious freedom. The Pew Research Center is nonpartisan and objective, so I happily refrained from political debates while I worked there. While there, I did work with the State Department’s IRF office, and admired their efforts. I also engaged closely with international religious freedom groups, and enjoyed their attempt to remain principled and bipartisan. Particularly, as a liberal, I was heartened to be able to work alongside many conservatives on this issue. I come at this as someone who is part of the religious freedom community, and wants it to succeed.

So why might this appointment seem encouraging? Well, the fact that the IRF ambassador was appointed within a few months is a big deal. George W. Bush took about a year for his IRF ambassador to be appointed. It was about a year before Obama’s first IRF ambassador took office and the post sat empty for about a year after she stepped down. That this appointment seems to have such priority appears a good thing. Moreover, Brownback was a sponsor of the International Religious Freedom Act in 1998 — that created the IRF office — and advocated for Christians in Sudan when he was a Senator.

That is the extent of the encouraging signs about this appointment, however. International religious freedom advocates should be worried for a few reasons.

The first is his lack of a recent record on international religious freedom. Over the past several years, Brownback was primarily known for his efforts to advance conservative causes as Governor of Kansas. It is difficult to engage on international religious freedom issues without having closely followed them prior to taking office. By contrast, David Saperstein — President Obama’s last IRF Ambassador — had a long career focused on religious engagement, including as part of the United States Commission on International Religious Freedom. Indeed, the importance of recent experience was the reason many conservative religious freedom groups opposed President Obama’s first IRF Ambassador, Susan Johnson Cook.

Another concern — which my conservative religious freedom advocate friends may not share — has to do with Brownback’s stance on culture war issues. As Governor, Brownback put in place abortion restrictions and signed controversial laws on campus religious groups. Having conservative views does not disqualify someone from championing international religious freedom, which is a bipartisan issue. But Brownback may focus on the intersection between the culture wars and religious freedom to the exclusion of clear cases of religious repression. Indeed, debates similar to those in the United States about women’s health care and reproductive rights have occurred in Europe; previous IRF office reports have highlighted some of these.

So as someone who works on religious freedom, it’s nice we seem to be getting attention. But we should not be so happy about this nomination that we view Trump as a potential ally. Nothing Donald Trump has said or done indicates he will support international religious freedom. If religious freedom advocates rush to celebrate this move, and refrain from criticizing Trump because of it, we will be seriously undermining the effectiveness and credibility of this cause.