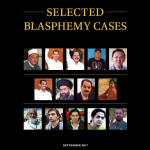 Blasphemy laws are a global concern, present in all of the world’s regions. These laws, which punish expression or acts deemed blasphemous, defamatory of religions, or contemptuous of religion or religious symbols, figures, or feelings, have punishments ranging from fines to imprisonment and death. They also embolden vigilante groups who mete out their own extrajudicial “justice,” including killings, often with state impunity.

According to their proponents, blasphemy laws promote religious harmony and public order. Unfortunately, they do the opposite, often leading to instability and violence in countries around the world, with negative consequences for individuals, communities and nations. USCIRF believes that all human beings should be accorded dignity, respect, and freedom no matter their convictions, and the Commission affirms the right of private individuals and groups to peacefully oppose expression they consider to be blasphemous.

However, while it is legitimate to speak out against blasphemy, the Commission maintains that government has no role in policing blasphemy and that laws against blasphemy are detrimental to religious freedom and related human rights and are deeply problematic because they:

• Often are vaguely worded, and few specify or limit the forum in which blasphemy can occur for purposes of punishment;

• Are inconsistent with the approach agreed to in UN Human Rights Council Resolution 16/18;

• Are used disproportionately against religious minorities or dissenting members of the majority community and are ripe for abuse;

USCIRF urges the repeal of blasphemy laws worldwide. We must continue to confront blasphemy laws and the horrific acts they unleash as an assault on human rights and dignity and press offending nations to repeal these laws, protect those who have been accused, and release people arrested, charged, imprisoned, and sentenced to death for blasphemy.

The Commission believes that when discussing blasphemy, it is important to focus on the real people impacted, and not just the laws themselves. The individuals highlighted here are only a sample of those who have been negatively impacted by blasphemy laws. For some we have pictures, but for many we do not. Read their stories, the charges against them, and their sentences to better understand the devastating impact of these laws and the need for repeal.