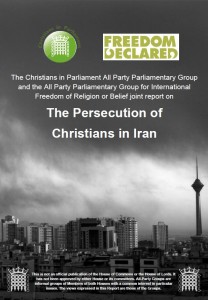 In the introduction to the report, the Co-Chairs of the Enquiry, David Burrowes MP and Baroness Berridge of the Vale of Catmose, write:

“This is a subject that weighs heavily on our hearts, particularly following our initial Inquiry, where MPs visited the Middle East in 2012 to meet personally with Iranians who had endured severe maltreatment in their homeland because of their faith.

It was with cautious optimism that we watched Hassan Rouhani become President of Iran in August 2013. We joined with many Iranians in hoping that his influence would soften Iran’s harsh policies toward the nation’s religious and ethnic minorities.

Sadly, we have been disappointed that his positive promises and moderate language have not translated into any meaningful improvement. The persecution remains as severe today as it was in 2012, when the Christians in Parliament All Party Parliamentary Group (APPG) produced its first report on the Persecution of Christians in Iran.”

the report concludes that Iran’s Christians and other persecuted religious minorities are faring no better under the supposedly moderate Rouhani than they did under his presidential predecessor.

The report is based on evidence gathered from Iranian witnesses during hearings in Parliament, and written submissions by human rights experts, including Dr Ahmed Shaheed, United Nations Special Rapporteur on the situation of human rights in the Islamic Republic of Iran. It cites President Rouhani’s campaign pledges to provide justice for religious minorities, but goes on to conclude on the basis of the evidence examined that respect for freedom of religion or belief has not improved since the 2013 election, and for some Christians it has worsened. Though the inquiry focused on the plight of the Christian community, the report recognises that the persecution of other religious minorities also persists very strongly.

Baroness Berridge, chairman of the All Party Parliamentary Group on International Freedom of Religion or Belief, said: “The panel heard first-hand testimony about the daily pressures and traumas that Iran’s Christians face, simply because of their faith. I am particularly concerned about the harsh treatment of those who convert to Christianity from Islam. Article 18 of the Universal Declaration of Human Rights makes clear that every person has the right to freedom of religion or belief, including the right to convert: to change one’s faith or beliefs. We hope, pray and labour for a day when Iranians of all faiths and none can live in their homeland without fear of persecution or harassment, with the full spectrum of their rights protected.”

The report was launched at a meeting in the Houses of Parliament addressed by Tobias Ellwood MP, Parliamentary Under Secretary of State at the Foreign and Commonwealth Office. It has been widely reported in the media, including this report on Premier after their radio interview with Baroness Berridge.