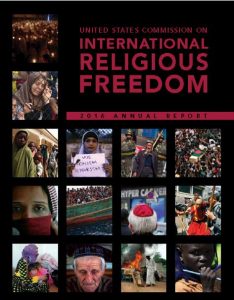 The 2016 Annual Report of the U.S. Commission on International Religious Freedom (USCIRF) covers the period of February 2015 through February 2016. It documents religious freedom abuses and violations in more than 30 countries and makes country-specific policy recommendations.

USCIRF concludes that the adoption of the recommendations found in the Annual Report would considerably advance U.S. efforts to protect and promote the universal right to freedom of religion or belief worldwide.

Read the report in full

This is how the Washington Times summarised the report:

From the Islamic State’s genocide against Christians and others to bigotry against Jews and Muslims in Europe and Beijing’s campaign against churches in China, religious freedom has “been under serious and sustained assault” around the world over the past year, the U.S. government said Monday.

The annual report by the U.S. Commission on International Religious Freedom faulted the usual suspects, including North Korea, Iran and Sudan. But it also leveled previously unseen criticism at some key U.S. allies, such as Egypt, and others with whom the Obama administration has been seeking warmer relations, such as Vietnam.

While Egypt has issued “public statements encouraging religious tolerance and moderation,” the report said Cairo “continue[s] to foster a climate of impunity” by failing to prosecute those responsible for sectarian violence in recent years, particularly violence that was carried out against Coptic Christians in 2013.

Despite strengthening relations between the U.S. and Vietnam, meanwhile, Monday’s report said Hanoi continues to control “nearly all religious activities” in the nation. While improvements have been made in the decades since the Vietnam War, the report said the government still “represses individuals and groups viewed as challenging state authority.”

Egypt and Vietnam are just two among several nations that received heightened scrutiny in this year’s report by U.S. Commission on International Religious Freedom (USCIRF) — a bipartisan federal commission created in 1998 to provide annual policy recommendations to the White House, State Department and Congress.

In all, the USCIRF called on the State Department to add eight nations to its existing list of “countries of particular concern,” which the commission defines as “countries whose governments either engage in or tolerate ‘particularly severe’ violations of religious freedom.”

There were already nine on the list, including Bruma, China Eritrea, Iran, North Korea, Saudi Arabia, Sudan, Turkmenistan and Uzbekistan. The commission recommended those nine stay listed and called for Egypt, Vietnam, Iraq, Nigeria, Pakistan, Syria, and Tajikistan to be added.

“By any measure, religious freedom abroad has been under serious and sustained assault since the release of our commission’s last Annual Report in 2015,” the USCIRF said. “From the plight of new and longstanding prisoners of conscience, to the dramatic rise in the numbers of refugees and internally displaced persons, to the continued acts of bigotry against Jews and Muslims in Europe, and to the other abuses detailed in this report, there was no shortage of attendant suffering worldwide.”

The Obama administration made international headlines last month when Secretary of State John F. Kerry officially declared that the Islamic State terror group has carried out “genocide” against Christians and other religious and ethnic minority groups under its control, including Yazidis and Shiite Muslims.

The development marked the first time U.S. officials have officially declared a genocide since 2004, when the George W. Bush administration used the term to describe the killing in Sudan’s Darfur region.

Monday’s USCIRF report said that the religious freedom climate in Iraq as a whole “continued to deteriorate in 2015,” especially in areas under the control of the Islamic State, also known as ISIS and ISIL.

“ISIL targets anyone who does not espouse its extremist Islamist ideology, but minority religious and ethnic communities, including the Christian, Yazidi, Shi’a, Turkmen and Shabak communities, are especially vulnerable,” the report said. “In 2015, USCIRF concluded that ISIL was committing genocide against these groups, and crimes against humanity against these and other groups.”

But Monday’s report also criticized the government of Iraqi Prime Minister Hader al-Abadi for turning a blind eye to religion-related atrocities carried out by Shiite Muslim militants in the nation.

“While ISIL was the most egregious perpetrator of human rights and religious freedom violations, the Popular Mobilization Forces (PMF), recognized by Prime Minister al-Abadi in September 2015 as officially part of the Iraqi state, have continued to commit systematic attacks against Sunni Muslim civilians, exacerbating sectarian tensions,” the report said.